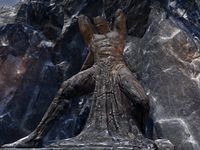 The Code of Malacath, also known as the Code of Mauloch, is a set of unwritten rules which instructs Orcs on how to deal with matters of honor and vengeance, but also covers daily life.[1][2][3] According to legend, it was revealed to the Orcs on the day the Trinimac was corrupted and transformed into the Daedric Prince Malacath. He spoke the Code to his faithful, and swore vengeance against those who would break it.[4]

The Code is considered one of the three constant truths of life among the Orc clans, the other two being "the stronghold" and "the grudge". These three truths are said to be represented in the Orc-afterlife by the Ashen Forge - Malacath's stronghold in the Ashpit. It's said that adherence to the Code by Orcs keeps this fires of the forge alive, and the white-hot coals are the literal manifestation of the bloody Code of Malacath. The Code fuels the fires of emptiness, betrayal, and broken promises, imbuing every newly forged Orc with a foundation of grievances and resentments that will take them far in the mortal world. The hope is that every generation will be better than the next thanks to the efforts of the generation before it and its ability to adhere to and follow the Code of Malacath.[5]

The code contains many simple precepts, which are mostly tacit[1] and include prohibitions on theft, murder, and assault, though ample exceptions are made to these rules.[2][4] More explicitly, the Code encourages respect for forging and blacksmithing, requiring vengeance for insulted honor, and recognizing that death in combat is pleasing to Mauloch.[1] Orcs believe if something is not worth fighting for, it is beneath the Code.[2]

The Code sets rules for how to select a stronghold's chief through challenge and combat, and the "traditional roles" of the chief and his wives.[1] The Chief is normally the strongest male, and it is he who makes decisions for the clan and decides when the Code of Mauloch has been satisfied. Nearly all the women of the stronghold are the Chief's wives or daughters; the exception being the stronghold's wise woman, who handles healing and spiritual matters. Disputes are settled through short, violent fights. Orcs who displease the Chief are normally banished from the stronghold, being forced to live amongst the other races.[2]

Orc strongholds have no jails.[2] If someone commits a crime, the penalty is the "Blood Price", to be paid to the victim or their surviving relatives.[1] This involves payment in goods as restitution, or bleeding "enough" to satisfy the victim that punishment has been met. Some Orcs use a scale for weighing out blood price amounts, with different gold weights labeled "Chief", "Wife", and "Warrior".[6] In other cases, some Orcs keep detailed a record of all of the grievances and insults their family has suffered, with dates, specifics, and planned responses.[7]