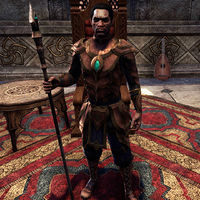 The Forebears is the name given to a social and political group of the Redguards. The Warrior Wave of Ra Gada, or first invasion of Yokudans to reach Tamriel, are now known as the Forebears. They cleared the way for their rulers, the Na-Totambu, and their faction, which is now known as the Crowns. When the Na-Totambu and the Yokudan nobility came later, Razul made himself Yokeda to cement the power of the Ra Gada, with some calling Yokeda Razul the first Forebear.[1] Forebears tends to be more nomadic in nature, as many of them work as traders and merchants throughout Hammerfell, and this also gives them the most experience when dealing with foreigners.[2]

One of the major differences between the Forebears compared to the Crowns, is that they worship the same pantheon as the Bretons and Imperials, and take a more liberal approach to tradition and religion.[3] Which is one of the biggest factors in why the two don't get along, as the Crowns believe that the Forebears engage in what is considered "outrageous non-traditional practices". For example, the Forebears are believed to secretly support the pariah Ash'abah tribe in their efforts to cleanse the stench of necromancy and undeath and even call upon them for aid. Which the Crowns view as a major affront to their religious practices, as those who strike down an ancestor are considered unclean and cursed.[4] The Forebears worship of Imperial deities Akatosh and Arkay, rather than the traditional gods of Ruptga, Tu'whacca, and Satakal, and their willingness to engage with Tamrielic cultures outside their own is heavily despised by the Crowns faction. This contributes to the hatred the Crowns and Forebears have for one another.[5][2]

The Crowns and Forebears represented the two halves of a highly stratified Hammerfell and fought a bitter civil war during the Common Era. Today they are at peace, though divisions remain. During the Third Era they were the most cosmopolitan of the Redguard factions and happily embraced the Empire of Tiber Septim. Recently a third faction, the Lhotunics, has emerged, representing a middle ground.

When the Ra Gada crossed the Sea of Pearls to eventually reach Tamriel, they landed on the harborage that became Hegathe. The landing site was in the possession of beastfolk and they were quickly displaced by the Yokudans. From their newly-founded settlement, the Ra Gada swept across the coastlines to expand their reach.[6] As the remaining refugees had left Herne to populate the province, the Yokudan government, the Na-Totambu became fully-integrated, using Hegathe as its capital.[7]

When the province of Hammerfell was annexed into the Second Empire, two political parties were formed to contribute to Cyrodiil's administration over the land. The Crowns were created from what was left of the Na-Totambu, who retained their high-ranking status in the Empire, using Hegathe as their capital. From there, they are represented by the Phyllocid Dynasty, who maintained their relationship with the Empire throughout its lifetime. The Forebears was the other political party founded in Hammerfell, from the warrior-lords that descended from the Ra Gada and governed tribal districts in the south. For the longest time, these groups were sworn enemies that exceeded far longer than the Empire itself.[7] It took the ascension of High King Ar-Azal, and his union with the Crowns daughter, Arlimahera and the Forebears daughter, Fereshtah, to break the divide between them.[8]

Circa 2E 862 when the Crowns monarchy left their ancestral throne of Old Hegathe, and took over the Forebears kingdom of Sentinel, it caused a schism between both factions. Baron Volag was chosen by the Forebears to strike an accord with the Crowns King, Thassad II for a short time truce.[9]:25 But when Thassad II passed away from natural causes in 2E 862, Volag and his Forebears launched a wide-scale rebellion against the Crowns that has since been remembered as the Purge of the North. After the first massacre, the Crowns of Sentinel led by Prince A'tor were force to flee the kingdom to the west, on the island-kingdom of Stros M'Kai.[10]

On the island, the Crowns prepared for their counterattack and managed to provide a strong retaliation against the Forebears.[10] But when the Forebears pleaded for assistance from the Third Empire, the tide of the war quickly shifted back against the Crowns until they were cornered in Stros M'Kai.[7] Some people believed that Volag was used by the Empire, for his ambitions for the throne.[11] As the conflict proved out of favor for the Crowns, Baron Volag and his Forebears disappeared from the public eye, but it is unclear whether it happened after he claimed Sentinel,[12] or if it happened after the Battle of Hunding Bay in 2E 864.[10] In any case, Sentinel was without a figurehead, and much like other human realms, a Colovian Officer,[7] in the form of Senecus Goddkey assumed the title of Provisional Governor for the Kingdom of Sentinel and the Forebears principalities.[7]

It's unknown what Baron Volag did while in hiding, but rumors insisted that he waited for a sign of weakness in the Empire.[7] And that sign came with Cyrus and the Restless League's uprising in Stros M'Kai, which saw the death of its provisional governor, Amiel Richton. News of the event had spread like wildfire and Baron Volag used the opportunity to re-claim Sentinel from the Provisional Government. Now instated as the Forebears leader of Sentinel, Volag met with Tiber Septim, and the new leader of Stros M'Kai, the Crown, Iszara to work out a treaty for the people of Hammerfell.[13] The First Treaty of Stros M'Kai was signed by the three parties and it consolidated the province's relationship with the Third Empire and led to the eventual integration of Hammerfell as a province to the rapidly expanding Empire. It has since been understood by the Redguards that they are part of the Empire, and not their subjects.[14][15]

In 3E 397 during the Imperial Simulacrum, there was a major war between Hammerfell, Skyrim and High Rock. During the war Skyrim defeated the forces of Hammerfell and High Rock and took many miles of the eastern parts of those provinces, including the cities of Elinhir and Jehanna.[16] Some of these territories were claimed to have been lost in previous wars at the expense of Skyrim.[17] The war resulted in a deeper division between the Redguard factions of Crowns and Forebears, as the Forebear cities showed no inclination to help the Crown cities assaulted and occupied by the Nords, which in turn was a response to the lack of help by Crowns to the Forebears during the Camoran Usurper's invasion.[14]