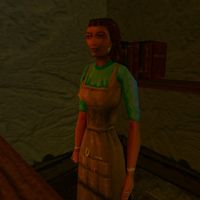 Krisandra is a Redguard woman who owns the Silversmith's in Stros M'Kai. She supports the Forebear cause, but realizes the Empire is in charge now. Despite having a shop, Krisandra does not sell anything to you.

She reveals that Lakene lost his wife's silver locket while gambling in the Smuggler's Den. He wanted Krisandra to replace the locket, but she could not create one matching Lakene's description.

When you start the quest A Legendary Flask, her house is unlocked and you must fight two guards inside. If Falicia has told you about the silver ship, you can ask Krisandra about it and she will give you a key to the storeroom behind her house. You'll find a silver boat here engraved with part of the Flask of Lillandril map.

"Excuse me, but where I come from, gentlemen don't wave blades at ladies."
"Didn't your parents teach you not to threaten unarmed women with weapons?"
"Put that away. I find it extremely offensive."

"Greetings, my lady. I am Cyrus."
"A Sentinel accent, isn't it? I am Krisandra, silversmith of Stros M'Kai. Pleased to meet you."

Agreed to kill the soldiers in her house:

"Cyrus! What happened with those soldiers in my house?"
Both are dead:

"They won't be bothering you anymore."

If you refused to kill soldiers:

"You've got a lot of nerve coming back here."

"Are you from Sentinel originally?"
"Yes, I owned a shop there for six years -- on Market Street, perhaps you know it?
"Sentinel is overcrowded these days, and when I heard of a business for sale here, I decided to take the chance. So far I haven't had too much trouble from the locals."

"Why would the local people give you trouble?"
"Forebears aren't exactly popular around here, you know? I've never been much involved in politics, but I always supported the Forebear cause.
"Before the war, all that didn't matter. I had many friends who are Crowns. But things are different now."

"You're new here, then?"
"Arrived only 2 months ago. I'm still trying to get things sorted out.
"The former owner must not have cleaned this place for twenty years, there was so much junk piled up. I tossed most of it in my warehouse next door just to get it out of the way."

(Unlocked by "New in Town")

"The old silversmith -- he left because of the war?"
"He died, actually. I bought the shop from his estate. I guess there was some kind of incident in the Old Quarter, where the most fanatical Crowns lived."

"I'm looking for my sister, Iszara. Do you know her?"
"I'm afraid not. I have few friends here as yet. I'm hoping that as time passes things will get back to normal, but the war is still too fresh for people here to forget that I'm a Forebear."

"How has Stros M'Kai fared under Imperial occupation?"
"It's suffered greatly. The incident in the Old Quarter seems to have left the city in shock. The Crowns lost the war, after all. You can't expect them to get over that in a few months."

"What can you tell me about the Restless League?"
"I know I sound just like every other Forebear, but they were nothing more than pirates, using the civil war as cover for their crimes.
"They were a black mark on the Crowns' cause from the beginning. The destruction of the League is one of the few good things to come from the Empire's victory."

"So the League has been wiped out?"
"As far as I can tell. They haven't been seen in Stros M'Kai in weeks.
"Their last hurrah was blowing up the Governor's flagship -- a pointless gesture which only spurred Richton to finish cleaning out their organization from the city."

(Unlocked by "Destruction of League")

"What do you know of the new Provisional Governor Richton?"
"Ruthless to a fault. Served him well during the war, but not a trait guaranteed to win loyalty in a new province.
"I wonder how much Tiber Septim knows of what Richton is up to here in Hammerfell."

"Tiber Septim, the colossus of our generation, Tamriel's new self-proclaimed emperor. What's your take?"
"The Empire's expansion has proceeded according to the merits of the Emperor's servants.
"By all accounts, Septim's governor in High Rock has ended the feuding of the witch-kings there with tact and skill.
"The Emperor's representative here in Stros M'Kai is not of the same caliber, and the Emperor is viewed dimly as a result."

"You call it the Empire's victory? What of the Forebears?"
"Please. I'm not one of the Forebear fanatics. Anyone can see that Baron Volag was used then cast aside by the Empire.
"He hoped to be king of Hammerfell, but who has seen him since his supposed victory?"

"You disagree with Baron Volag's decision to ally the Forebears with the Empire?"
"A gamble that he lost. As a Forebear, I supported Volag's claim to the throne of Hammerfell. I never supposed he was infallible.
"But the war's over now, and the only thing to do is make the best of the new situation -- a philosophy more Crowns should embrace, if you ask me."

(Unlocked by hearing about it from Gerrick, Mariah, Prnell, or Siona)

"I've been told of a Smuggler's Den under the Cartographer's shop. Have you heard of it?"
"Sure I have. Smuggler's Den! Ha! A pretty grandiose name for a place where the local boys go to get away from their wives and play cards."
"So you think it's nothing more sinister than that?"
"Well ... I've heard rumors it was connected with the Restless League, but they're hard to take seriously if a joker like Lakene could get in."

"I admire your courage, a Forebear in the Crown capital."
"When I first arrived, the Restless League made a few threats, but the Empire seems to have them under control now.
"Forebear and Crown, that's all in the past anyway. Hammerfell is part of the Empire now. At least we finally can stop killing each other."

"Do you know what happened?"
"It was before I arrived. The people here tell some pretty fantastic stories.
"As near as I can figure, the Crowns burned their houses down around their heads rather than surrender after the Imperials took the city.
"Some would call that admirable, but I think the Redguards put too much stock in zealotry."

"I haven't been back to Sentinel since before the war. How did it fare?"
"Better than Stros M'Kai. Before I came here, I thought the stories I'd heard were just Crown propaganda.
"The Crowns recaptured Sentinel just before the Empire intervened, but it was nothing like this.
"Stros M'Kai was the center of Crown resistance, and I suppose the Empire is making an example of the city."

If you haven't talked to Lakene:

"Lakene? Who's he?"
"The local handyman. Not a bad sort, don't get me wrong, but a bit lunatic fringe. Hardly what I'd call the foundation of a revolution."

"What does Lakene have to do with the Smuggler's Den?"
"Oh ... I really shouldn't gossip, but I'm sure you won't tell anyone, will you Cyrus? Seems he was gambling at the Smuggler's Den and lost his wife's antique silver locket.
"He came to me, desperate to have it replaced so she wouldn't find out.
"I'd have been glad to help, but I couldn't reproduce it simply from his description. Poor fellow, he went away quite crushed."

"I'm told of a legendary magical flask, supposed to be buried somewhere on the island."
"Sounds fascinating. I love stories of buried treasure."

(Unlocked by Falicia: "Flask of Lillandril"; replaced by "Map to Flask")

"Perhaps you've seen a silver box shaped like a ship? It has something on it I'm looking for."
"No, sorry, nothing like that in my shop."

(Unlocked by Falicia: "Flask of Lillandril" when soldiers are dead; disappears once asked)

"I think I know why those soldiers were searching your house. The Governor may think you have part of a map showing the location of the Flask of Lillandril."
"Why would he think that? I'd never even heard of this flask before I came here."
"I've learned that one piece of the map is engraved on a silver ship. Sound familiar?"
"No ... but I inherited a load of junk when I bought this shop.
"I put it all in my storeroom, next to my house, but I haven't had time to look through it. Here, take the key. If you find this ship, keep it. It's only bringing me trouble."

(Unlocked if both soldiers are dead, regardless of other dialogue)

"I've killed several Imperial soldiers who had broken into your house. I hope that won't cause you any trouble with the Governor."
"Hmph! The Governor should hope I don't cause him any trouble over this. What possible reason could his soldiers have for breaking into my house?
"A loyal Forebear, of all people, one of his few potential allies in the city! Not a good sign for the Empire's future here in Hammerfell."

(Unlocked if soldiers are not dead, but you've gone inside her house)

"Are you aware that Imperial soldiers are ransacking your house?"

"I thought you were going to take care of that!"

"Aye, and you refused to help me! Change your mind?"

"What?! Cyrus, you look handy with a blade. Although I deplore violence, I deplore being robbed even more. Will you stop them?"

If second or third option:

"Sorry. I don't need any more Imperial entanglements."
"You disappoint me, Cyrus."

"Excuse me. Perhaps we can speak later."

Response to you standing behind the counter:

"You're free to look around, but not behind the counter, please."