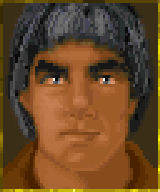 King Lhotun, namesake of the party

The Lhotunics are the third faction in Redguard society that appeared after the Warp in the West. During the Warp, the Forebear city of Sentinel became the dominant power in most of northern Hammerfell. However, most of Sentinel's new lands were Crown. To keep his kingdom together, King Lhotun was forced to create what some consider a third party, one with reverence for the Yokudan past but respect for the Imperial ways. The moderate Lhotunics have attracted nothing but contempt from both the Forebears and the Crowns.[1]