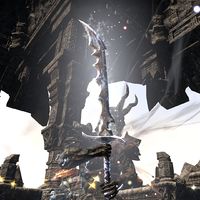 A Shehai or "Spirit Sword" is an ability used by the Ansei to manifest a sword from their very soul.[1] By sheer force of will, an Ansei warrior could create this ethereal sword of pure thought and it would take shape in their hand.[2] This form of the Way became known as "Shehai Shen She Ru" or Way of the Spirit Sword,[3] and all sword-singers trained to learn this form through intense training and meditation in the Way of the Sword, but not every swordsman was successful in becoming an Ansei.[1][4] Those who could were said to be more than mortal.[5][6] Conversely, there have been certain gifted individuals who could form a Shehai from a very young age or with little or no training.[4] Other times, a Shehai may be formed in times of great stress.[3][4]

To become an Ansei, a sword-singer had to demonstrate an ability to form the Shehai.[4] These Shehai were typically described as pale, misty, insubstantial, and as if it was made of light. Sometimes its shape wouldn't even be particularly sword-like, and would be of no use as an actual weapon.[1][7][4]

Ansei of the second-rank and above were known to have the ability to not only form the Shehai, but wield it as a weapon in battle.[4] Their Shehai shined brighter and was much deadlier. Described as an "unstoppable weapon of great might" that could cut down foes like "a scythe through wheat", disarming such an Ansei could only be done by severing their head or taking their mind.[6][1][4] There was some evidence, however, that suggested the Shehai of an Ansei could be shattered, leaving behind only its essence.[8] Ansei of the first-rank are said to have been notoriously powerful, with the Shehai of a first-rank Ansei reportedly having been what caused Yokuda to sink.[9] Ansei of the highest virtue wandered the countryside engaging in battle, righting wrongs, and seeking to end the strife.[1] To them, manifesting the Shehai was said to have come as naturally as breathing.[10]

After conquering Hammerfell, the Yokudans found themselves in a time of relative peace. Many warriors put down their swords in order to build their new nation.[11][12] Ansei warriors became very rare, and although many training halls were established throughout Hammerfell, very few produced masters of the Shehai.[4]

When Hammerfell came under attack from a race of giant Goblins from a rent in space time,[7] the Queen of Ojwambu pleaded with Derik Hallin, the "Last of the Ansei". According to legend, Hallin called forth the spirits of long-dead Ansei to aid him in his defense of the city. Numerous Ansei warriors appeared and fought alongside Hallin until they were victorious.[11] Other accounts state that Hallin scoured the land to find the five mighty swords that ended a similar goblin threat during the time of Divad Hunding. Although their use was forbidden, Hallin and his companions wielded the blades and hurled the swords together into the void, defeated the goblin army by sealing them in the void between their world and Mundus. As a result, their Shehai was forever destroyed. Whatever the case, Hallin saved the people and restored the teachings of Frandar Hunding to Hammerfell.[7][13][14]

"We chose the blades and destroyed the beasts. But as a result, the Shehai—our spirit swords—were forever destroyed. Centuries of wondrous tradition was snuffed out. I must bear that weight always."
—Derik Hallin

By the mid-Second Era, there were no known Ansei warriors, with native Redguard swordsmen believing the existence of Shehai to be absurd[15] and some foreign scholars dismissed the Shehai as "superstitious nonsense".[6] For unexplained reasons, the Ansei simply died out.[16] When The Warrior constellation temporarily took a mortal form in the mid-Second Era, he wielded an extremely powerful Shehai that was capable of producing shockwaves and magical storms.[17][18] By the Third and Fourth Eras, although there were some who followed the old ways within the ancient Halls of Virtues of War, very few Redguards had ever seen a Shehai, let alone called forth one.[7]