Jehanna during the Imperial Simulacrum

Jehanna (also called Jehenna[1][2] or Jelhana)[3] is one of the eight major kingdoms in the province of High Rock,[4][5] situated on the northernmost icy shores of Wrothgar. Nestled in the snow-covered forests of the Western Reach, it is described as being as beautiful as its name.[6]

Jehanna lies on the northeast coast of High Rock, right near the border of Skyrim. It lies in the ancestral territory of the Fharun Clan, one of the major Orcish clans that reigned over the Wrothgarian wilderlands for countless years. An isolated dock that bore Jehanna's name was nestled between the base of Mount Sorrow, the tallest peak of Wrothgar and the mountain that holds the Fharun clanhold. It sat at the end of a lightly-forested valley and lay on the Sea of Ghosts. At the end of an off-beaten path, east of the dock is an old ruin called Coldwind's Den, the tomb of the legendary mount, Coldwind. Jehanna is neighbored by several settlements, including Cloud Spring to the southwest, Farrun to the west, and Skyrim to the east, towards Solitude.[4][7] 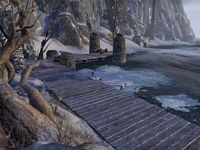 The Western Reach was conquered by the First Empire of the Nords, and incorporated into Skyrim's holdings,[1][8] prompting many Nordic colonials to settle in the region until they were viciously displaced by the Direnni Hegemony.[8] Jehanna as a name is recognized among the people of Tamriel,[9] and by the scholars in the mid-Second Era.[UOL 1] The Jehanna Road is a major roadway that runs near the Bjoulsae River in Bangkorai and rolls northeast into the Wrothgarian Mountains near the Murtag Stronghold.[10] In 2E 582, an isolated dock with the name Jehanna Docks could be found just to the east of Fharun Stronghold. By 2E 864, the modern-day kingdom of Jehanna had been marked on maps of the province.[11]

During the Imperial Simulacrum to the late-Third Era, the city-state of Jehanna was an active settlement. It was ruled by King Bedyctor and had a rivalry with Farrun.[6] When the War of the Bend'r-mahk occurred at the time, the land around Jehanna and other nations like Elinhir were engulfed in warfare with the Nordic warlords of nearby Skyrim. By the time, Uriel Septim VII returned to the throne in 3E 399, Jehanna had fallen under the control of Skyrim and the landscape was swiftly claimed by their Counts. By the waning years of the Third Era, resistance in the cities was feeble at best, but the fight remained strong toward the border.[1]

By the Fourth Era, the Nordic Ice-Blade clan had come to own land east of the city of Jehanna, but this would be threatened when the clan's heir, Pjofr Ice-Blade, abandoned his holdings to take up the mantle of the Gray Fox.[12] Circa 4E 201, a plot against the clan was put into action by a group of associates led by the siblings Erikur and Gisli of Solitude. The plotters poisoned Pjofr's sister, leaving her young son Smaref Ice-Blade as the heir to the clan's titles and wealth. Smaref was then used as a political puppet, allowing the plotters to make the necessary land transfers in order to construct a new port east of Jehanna. The orphaned Smaref was sent to Riften to live his life in relative comfort, unaware of what had occurred.[13] These actions forced Pjofr to relinquish his role as the Gray Fox to another, who proved themselves by aiding in the reclamation of the land deed. With his life of crime behind him, Pjofr adopted Smaref and returned to the Ice-Blade clan, prepared to take the responsibilities as the new leader.[12][14]