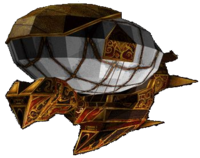 Airships are an uncommon method of transport in modern Tamriel, but have been used by many of the races of Tamriel.

The Dwemer were known to have had airships, with the Empire later using them, Lord Amiel Richton possessed one in the Tiber Wars that was subsequently crashed by Cyrus.

A prominent member of the Mages Guild created a patchwork airship out of Dwemer parts for an expedition to Solstheim, however, the airship crashed into the Isinfier Plains and all the crew died due to the cold and hunger.[1] This same airship was home to a camp of Rieklings in 4E 201.

The Sload of Thras are rumored to have airships that carry corpses from Senchal.[2]

Captain Nym was the captain of an airship that collected Star Teeth from the skies during the Merethic Era. However, the airship crashed into Glacier Crawl, in High Rock.[3][4]

Dragons can be ridden by those they deem fit to do so. The Last Dragonborn is one known example of a rider, as they flew to Skuldafn on the back of Odahviing[5], they also rode the dragon Sahrotaar in Apocrypha.[6]

The Akaviri are known to have used red dragons as war mounts.[7]

The Welkynars of Cloudrest tamed the native gryphons and used them as mounts. Given the city's central location on the island of Summerset, and with the help of these flying creatures, the Welkynars were able to quickly render aid across the entire realm.

The Royal Imperial Mananauts of the Elder Council was a largely unknown group who were known to travel to Aetherius. They were believed to be a holdover from the days of the Reman Dynasty.[8][UOL 1]

Bretons are known to have hot air balloons, one was used by the Apprentice in the Chimera of Desolation.

The Altmer of the Merethic Era had the Sun Birds of Alinor, which were known to have traveled Aetherius and collected genuine celestial mineral that created the great Orrery at Firsthold. They were dissolved due to the untenable expenditures required to reach magic by magicka.[8] They are described as being made of crystal and solidified sunlight, and having gem-encrusted mini-trebuchets fit for sailing which fire pure aetheric fire, and banners listing their ancestors all the way back to the Dawn.[UOL 2]