The Soul, also known as the Animus, is a feature of an entity which seems to be closely connected to its animating consciousness and the body it has, both spiritual and physical. All living things on Nirn seem to have a soul, though the souls of more intelligent and stronger creatures tend to be "larger" (more powerful). Under ordinary circumstances, the mind and soul of a mortal are intertwined. The word, "soul", is almost exclusively used to describe Anuic animus that mortals posses [1], though other entities like Dragons and Daedra also have an animus that serves a similar function.

It is possible that souls are composed of various parts and influenced by variables that are yet to be understood, for example a Shadow of the soul can be separated from it and transformed into an independent entity, leaving original soul in a weakened state. Other anomalies of soul mechanics include the odd nature of Cadwell, who shared his consciousness between his old body and the one formed by his Vestige, resulting in two distinct versions of the same person. While the precise nature of the souls is uncertain, what can be known is that souls are a source of mystic energy .[2] Soul Magic, Enchanting, Necromancy, Mysticism, and Conjuration all make use of this energy. Soul gems are the most common method of trapping souls, especially for enchanting, although items such as animus geodes can be used in some cases. 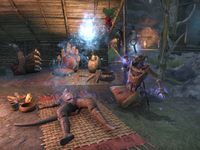 An Argonian's soul being torn from his body as he dies

Daedra lack an Anuic Animus, also known as a mortal soul,[1] each one instead possessing a Daedric soul known as a Vestige (sometimes also called an Animus[3]). When a Daedra is destroyed, either in Mundus or in Oblivion, its Vestige is banished to the Void,[4][3] and attracted back to the plane of Oblivion where it originated. A Daedra reforms according to the pattern within its Morphotype (a concept which seems to be interchangeable with the Vestige though it more closely relates to the form of a Daedra) using Chaotic Creatia (e.g. the Azure Plasm of Coldharbour).[1] A Daedric Prince can create a new Daedra by replacing an entity's original Animus with a Vestige.[5]

It is possible to trap the animus of a Daedra by magically infusing it into an item.[6] It is not known what happens to a Daedra killed in Aetherius,[7] though it has been suggested that this may be the one way to permanently kill a Daedra.[8]

Soul Shriven are mortals who have had their souls taken by Molag Bal. Cultists devoted to him ritually sacrifice victims,[9] who are pulled into Coldharbour,[10] their souls stolen and replaced by a Vestige at the moment of death.[1] This process leaves a soul shriven's mind and body intact and allows it to regenerate after death as the Daedra do. However, as they are not native to Oblivion, their bodies are imperfect imitations of what the soul shriven had on Nirn.[1] It also reduces the victim's willpower and causes their sense of self to degrade, allowing Molag Bal to enslave the soul shriven for eternity.[9] However, the process is imperfect, and over time both the mind and body of a soul shriven decay, resulting in a violent, feral, decrepit creature.[10] Some soul shriven also claim to still feel a connection to their souls, believing that they can feel sensations that correspond to the treatment of the soul gems in which their souls are kept.[11]

It has been suggested that the soul shriven experience this effect because mortals require an Anuic principle to maintain their forms. In this case, there might exist "paragon" mortals with a different Anuic aspect, who would retain their forms and sanity after becoming soul shriven, while still becoming immortal.[1] This hypothesis was confirmed during the Planemeld, during which a mortal became capable of fighting to defend Nirn even without a soul.[12]

Dragon souls are unique in that they generally persist eternally due to the link between a dragon's soul and its physical remains being far stronger than that of a mortal.[13] It is possible to use powerful soul magic to sever the connection between a dragon's soul and its physical remains, although the effects of this is the subject of fierce scholarly debate, with some speculating that a dragon soul once severed may simply dissolve over time or return to join father Akatosh.[13] Dov (Dragons and Dragonborn) can absorb the souls of fellow dov.[14] This grants the recipient a portion of the knowledge and life essence of their fallen opponent, but it also destroys the dov permanently, rendering it beyond the ability of any ritual to resurrect.[15][16]