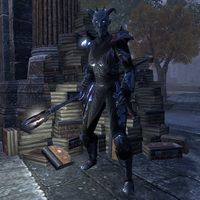 Xivkyn are an intelligent race of Daedra who were created by (and swear fealty to) the Daedric Prince Molag Bal. They were created to serve as his personal guard, and are the product of experiments with vestigial hybridization between Dremora (or "Kyn")[1] and Xivilai in the Vile Laboratory.[2] They are fiercely loyal to Molag Bal, and were in charge of the Daedric occupation of the Imperial City during the Planemeld.

Xivkyn are known to train Clannfear[3] and Daedroths, and consider harvesters to be lacking in cunning.[4] The term "Xivkyn" is heavily Cyrodilicized, referencing the Xivkyn's resemblance to the Dremora and Xivilai the race was "bred" from. They have several names for themselves, including the terms Stolavryk, Khimrykif, and Vyrsago. How the Xivkyn refer to themselves seems somewhat sporadic, as what they call themselves is said to "change depending on the hour".[5] They appear as tall humanoid Daedra that possess blue-grey skin and ridged black horns that vary in length and curvature. Apart from the standard rack of horns, they may also have smaller horns on their forehead, crown, or chin. They also have sunken, icy blue eyes resembling their master's, as well as tapered ears. They tend to tower over their Dremora subordinates.[6]

Xivkyn are known to adhere to a strict uniform code, with guidelines laid out in accordance with the will of Molag Bal. Their weapons and armor are practical, but reflect the fearsome image Molag Bal would like a powerful servant of his to present.[7] They are often fully covered in armor, leaving only their glowing eyes visible,[6] instilling a fear of the unknown in mortals.

Xivkyn place great emphasis on loyalty, particularly towards Molag Bal, the "Dark Lord".[4] The Xivkyn are like their progenitor in many ways, and share a good deal of his personal qualities. They possess boundless cruelty and take pleasure in the suffering of mortals.[8][9] Xivkyn are obsessed with collecting soul gems, and are known to plot against one another in an effort to acquire more of them. These conflicts are commonplace, and rarely result in punishment from those of higher rank.[5] The Xivkyn are arrogant, prideful and eager to please their master. If the opportunity to enhance one's reputation in the eyes of Molag Bal presents itself, they will gladly take it.[10]

A member of the Coldharbour Elite Guard on patrol. Note the banner.

The Xivkyn maintain a strict code of military efficiency, and are known to be skilled in physical and magical combat arts.[5] To this end, the Xivkyn fulfill plenty of roles in Coldharbour. Xivkyn Tormentors are knowledgeable in both Daedric and mortal anatomy. Tormentors use their endless lives studying innumerable methods of inflicting pain for the benefit of their master.[11] Xivkyn Dreadguards serve as shock troops, and are devoid of the pedantic attitudes held by the Dremora.[12] Xivkyn Augurs are exceptionally talented mages who share a mental link with the Lord of Brutality, and act as conduits for his dark visions.[13] While notable, these examples are but three of many roles Xivkyn take beneath the banner of Molag Bal. There also exists a force of exceptionally powerful Xivkyn known as the Coldharbour Elite Guard. These individuals tend to bear banners during campaigns, and oversaw the portals to Coldharbour that were opened in the deepest depths of the Imperial City Sewers during the Planemeld.[14] The Lord Warden of the Imperial City Prison was granted his own council of elite Xivkyn warriors.[15]

Like many other Daedra, the Xivkyn detest all mortal races. However, they hold particular contempt for the Dremora,[5] whom they view as lesser beings. This contempt was not mutual for some kyn; the Dremora Lyranth viewed the Xivkyn as potentially acceptable allies,[2] but may be more trouble than they are worth. This is in part likely due to their Xivilai blood, which may be the origin for their disgust for the Kyn.[16] Others believed the Xivkyn would replace them, and loathed their existence. Some went so far as to suggest that the Dremora should attempt to destroy the Xivkyn. Xivkyn officers are known to mistreat the Kyn under their command, and even held the Mindshriven Legion Zero in higher regard.[4] The Xivkyn also hate the other half of their origin for the same reasons that Dremora do. To them, the Xivilai have pride without merit, cheap cunning, and questionable loyalties.[16]