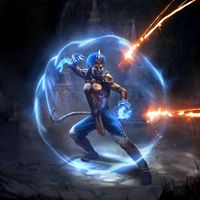 Alteration is one of the six schools of magic. Spells in this school change the world around the caster so normal physical truths no longer hold. It is sometimes confused with Illusion magic, as both schools seek to change normal truths. Illusion magic, however, is not bound by the laws of nature but Alteration magic is. The power of Alteration comes from the fact that the nature of its changes applies to all, whereas Illusion magic affects only the caster and the target.[1]

The spells of the school seem to have originated with the Ayleids of southern Cyrodiil no later than the second century of the First Era, when they used them to resist the armies of Alessia as they swept across the continent.[2] Their mastery of such spells extended the siege of the area around what would later be Bravil by some time. The usefulness of the school in the art of war was illustrated again at the end of the first era, when the Imperial forces used it to outwit Vivec by sending an entire army underneath Lake Coronati to take the city of Ald Marak.[3] These military applications were evidently in the mind of Berevar Bero, an illusionist who, between late 3E 399 and 3E 426, made a speech that argued the School of Destruction should be merged into the School of Alteration.[4]

In 3E 431, the Council of Mages decided that Alteration magic in Cyrodiil was to become the responsibility of the guildhall in the town of Cheydinhal.[5]

Typically, the spells boil down into the following types: shielding, creating objects, changing weights, water effects, actions on locks and movement through the air.