The UESPWiki – Your source for The Elder Scrolls since 1995
< Lore: Minerals: Crystals / Alchemy: R
Jump to: navigation, search

Ebony, a rare volcanic glass, is one of the most precious substances in Tamriel, mainly found in Vvardenfell, buried in the lava flows from Red Mountain.[1] Veins can also be found in Solstheim, and occasionally on mainland Skyrim, Cyrodiil and High Rock.[2][3] Raw ebony itself is an extremely hard, durable, black glass-like substance.[1] It is also known as Godsblood,[UOL 1] as it is said to be the crystallized blood of a god or gods,[4][5] Lorkhan in particular.[6][7] The acquisition and use of ebony can lead mortals to transcend their limitations.[7]

The ore has several alchemical properties[8] and is often smelted into ebony ingots for use in smithing.[9] The process of refining the ore takes six months, but the process could be sped up to only a few days with the aid of a convection oven that is stoked by white magical flames. Ebony armor is made by repeatedly folding the ore upon itself to form strips, which are then molded into shape.[10] This creates a durable, heavy armor. Ebony weapons are also highly prized. Daedric armor and weapons are created from ebony, by imbuing the object with the magical substances of Lesser Daedra, in a process known only to the denizens of Oblivion. It has been claimed that exceptionally skilled smiths can create Daedric armor by throwing a Daedric heart into melted ebony under a lunar phenomenon, with the harvest moon being the best time to do so.[11]

According pre-ri'Datta Khajiiti myths, after the events of Convention resulted in his organic heart being removed, Namiira filled the hole where Lorkhaj's heart used to be, and kept him alive as a perverted imitation of his heart. Knowing that Namiira would overcome him, Lorkhaj fled to his sister Azurah, who cleansed him of his corruption, and flung the Dark Heart into the Void, and Lorkhaj perished within Azurah's embrace.[12][13] Azurah had observed the Dark Heart beating like a drum, with each heartbeat spewing "black blood" (ebony) that tapped the floor to form a rhythm.[12] The spirit Noctra was later born of this black blood at the steps of the Void Gate.[13] The spirit Boethra created the Ebony Mail out of this substance, which functions as the "death-shroud of Lorkhaj", which she wears on nights of the Ghost Moon, and "wages war beyond the Lattice".[14]

According to Nordic myth, Ysgramor cried tears of pure ebony as he watched the city Saarthal burn. His son Yngol collected the tears and used them to forge Wuuthrad, his legendary battleaxe.[15] Molag Bal's Dark Anchors are made of ebony-alloy cold-iron, which is smithed by Dremora in the Black Forge.[16][17]

The Dunmer are said to have learned to forge Ebony back in "Boethiah's day".[UOL 1] The curves featured in Ebony weaponry emulate the Dunmeri style.[18]

The association with Lorkhan's blood reaches various cultures. The term "Shor's blood" is commonly used by Nords to exclaim surprise,[19] though the Breton equivalent is the phrase "Sheor's blood".[20] The town of Shor's Stone is evidently named after Shor, and is known for its ebony mine, where miners harvest the blood of Shor.[21] Some Nords believe Nirncrux to also be the blood of Shor.[22]

Tiber Septim coveted the vast source of Ebony in Morrowind, leading to it being one of the main reasons for his decision to invade it.[23] Sometime after the signing of the Armistice, it was protected by Imperial law during the Third Empire, and could not be mined or exported without an Imperial charter.[1] The East Empire Company essentially became the sole authority to trade in raw ebony.[24] 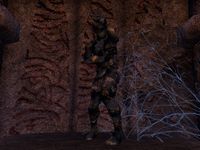 A statue of false Ebony

The Vassir-Didanat Ebony Mine in the Ascadian Isles region of Vvardenfell had changed ownership over the years.when A barely kept secret is its source of Ebony, which is mostly lackluster, but just enough to be worth mining. Unsatisfied, one of the previous owners of the mine turned to Clavicus Vile, and erected a shrine within its interior. They made a deal with the Prince of Bargains, requesting a limitless supply of Ebony, and Vile provided them a formula for them to do so.[25] This substance, dubbed "False Ebony", looks and feels like real Ebony, but can be told apart by a skilled craftsman.[26]

Clavicus Vile's False Ebony is created by subjugating a mortal to his liquid alchemical formula which ultimately turns the afflicted's flesh into the ebony-like material. Centuries after the Daedric pact,[25] Circa 2E 582, the mine passed into the ownership of Rethan brothers of House Hlaalu, who decided to hire an alchemist by the name of Gavros to further research the formula. He subjected much of the miners to the formula, discovering that "blood pressure must remain consistent until the last possible moment". His final breakthrough involved turning the formula from liquid to solid based, making the process much faster, but it came with the caveat of turning the victims of the experiments feral.[27] With a vapor based formula perfected, and its ability to make its victims feral creatures that would eventually degrade into statues, Gavros hypothesized that vapor-based False Ebony could be used as an airborne alchemical weapon.[26] Unfortunate for him, the breakthrough proved to be too effective, and he was exposed to it when it got lose, leaving him to the same fate that he subjected his victims to.[28]

An adventurer was hired to investigate the rumored curse of the mine, and discovered the feral victims that now populated it. There, they recovered Vile's foul formula, and Balmora's Hlaalu Councilor requested it remain within the Houses hands, but it is unknown if the adventurer complied.[29]