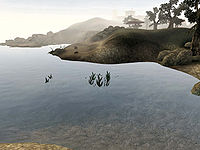 Lake Amaya, a large lake in the Ascadian Isles 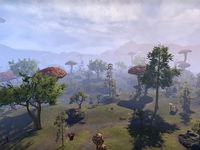 The Ascadian Isles were fertile, lush agricultural lowlands mainly under House Hlaalu control in Vvardenfell's southwestern area. The climate was temperate and comfortable, with moderate rainfall. The region encompassed land as far south as Ebonheart, west to the Foyada Mamaea, north to the central Ashlands just past the Fields of Kummu shrine, and east to the large Daedric shrine of Ald Sotha. The land was rich in nutrients and therefore littered with small farms and plantations. The islands themselves, while scattered, were close enough for easy transportation, the only main obstacle being Lake Amaya. Notable vegetation included large mushroom-like plants not unlike trees, cork bulb, marshmerrow and muckspunge.[1]

Major cities in the Ascadian Isles included the Imperial stronghold of Ebonheart, the Temple city of Vivec, the market town of Suran, and Pelagiad. The architecture was a mix of Hlaalu, Velothi, and Imperial. Additionally, many of the councilors of Great House Hlaalu maintained plantations in the Isles to exploit the region's good growing soil, and to breed netch for their leather.[1]

The largest of these plantations was the Dren Plantation, a large farm in the center of the region, north of Vivec. In the mid-Second Era, it belonged to Mistress Rilasi Dren, who was later arrested for being involved in a corruption scandal with Marshal Hleran.[2] [3] During the late third era, it was known for its connections with both House Hlaalu and the Camonna Tong.