You probably heard of the Camonna Tong. It's the name whispered in dark alleys as blood pools on the cobblestones, the signature on the ransom note left on a neighbor's bed. A shadow, a curse, a boil upon the arse of our society. — The Lure of the Camonna Tong

The Camonna Tong was a large Dunmer criminal syndicate hailing from the land of Morrowind. The Tong was characterized by their fierce opposition to any foreign incursions into Morrowind.[1] Many of the syndicate's schemes were designed to get rid of outlanders or put them into fearful and subordinate positions, with most Tong members believing they should be tolerated only as slaves. However, on a handful of occasions, the business potential of working with foreigners has outweighed their strong distaste for those of other races.[2][3] The Tong engaged in a wide variety of criminal activity, including using slaves as drug mules,[4] and kidnapping and torturing outlanders who they perceived as a "threat" to Dunmeri businessowners.[1] 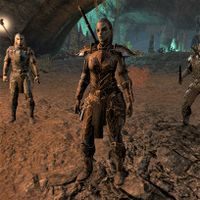 Avrusa Duleri, a member of the Camonna Tong in the Second Era

"The Camonna Tong are slavers, murderers, extortionists, everything a vile crime syndicate can be. They don't like Outlanders, especially ones who cut into their profits." – Vorar Vendu

The Camonna Tong has existed in some form since at least the mid-Second Era and has been described as "old and powerful."[5][6] In 2E 582 the Dunmer of Morrowind (with the exception of the Telvanni) were members of the Ebonheart Pact. They maintained open borders with the Nords of Eastern Skyrim and Argonians of northern Black Marsh. The Camonna Tong was active at this time, and sought a foothold on the West Gash region of Vvardenfell.[7] During this time, the syndicate was known to promise stability, a steady stream of income, structure, glory, and the possibility of climbing the ranks. These promises were enough to convince many Dunmer down on their luck to enlist. Illegal activities included robbery, break-ins, extortion, kidnapping, beatings, murder, and slave trafficking.[1][8] In addition to their illicit activities, the Camonna Tong "talked big" about driving away the outlanders and taking Vvardenfell "back for the Dark Elves."[1] Among slaves, the Camonna Tong was even more feared than House Telvanni.[9] Additionally, at least one Second Era Dunmer referred to the Camonna Tong as a "crime family", though which family, and how exactly this affected the syndicate's structure and operations is unknown.[10]

That year, the Tong came into conflict with the Orcish 'Ropefish' abolitionist gang and the Tribunal Temple.[11][12] Ex-Daggerfall Covenant member and Ropefish founder Khartag was presented an ultimatum by Avus of the Camonna Tong, demanding the syndicate be included in the slave smuggling efforts.[13] The terms included increasing the price for slaves to escape, chaining slaves en route, and compacting them into small ferries.[11] This rubbed Khartag the wrong way, and he reportedly told the Camonna Tong to "tusk off."[14] Insulted, the Camonna Tong sent a force led by Avrusa Duleri to storm the Ropefish operation in Khartag Point and kill Khartag. Though Duleri slew the Orc personally with a poisoned blade, the Ropefish gang survived,[15] and she was killed shortly thereafter.[11] Some of the slaves managed to escape, but many fell prey to the Dreugh living in the caverns.[11] Not long afterwards, the Ordinators of Vivec City had the caverns investigated for slave smuggling. The Temple intended on preventing the Camonna Tong from gaining a foothold in the region, but needed confirmation before being able to act. With a tip from a former member and assistance from contracted mercenaries, the Temple acquired the proof they needed to act.[12]

The Camonna Tong was known to give out wooden tokens as a form of currency, issued by the syndicate to its most observant snitches. They were said to be valuable to the right people.[16]

The Dark Side of House Hlaalu[edit]

"You want peace? Like the peace of the grave we've had since the Tribunal betrayed us and signed the Armistice? Dagoth Ur has made me a better offer. The Sixth House will rise again and crush the Empire and those smug hypocrites in the Tribunal." – Orvas Dren 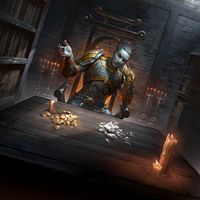 By the late Third Era, the Camonna Tong had become closely entwined with the affairs of Great House Hlaalu.[17] They had grown more powerful and ruthless than ever since the Imperial occupation, and wielded great influence in the higher ranks of House Hlaalu. The Camonna Tong became entwined in direct competition with the Imperial Thieves Guild for control of illegal trade, and swore to exterminate the upstart outlander newcomers.[18] In 3E 427 they had come under the leadership of Kingpin Orvas Dren, brother of Vedam Dren, the Grandmaster of House Hlaalu and Duke of Vvardenfell District. True to their ancient beliefs, the syndicate continued to oppose outlander influence such as the Third Empire. Members claimed the Tong was "just a society of businessmen" who were "tired of seeing Morrowind run by outsiders who understand nothing about Morrowind."[18] They had bases in the Hlaalu-ruled settlements of Balmora, Gnaar Mok, Hla Oad, the Vivec City Hlaalu Canton, and plantations in the Ascadian Isles region. The Tong maintained an additional hideout in Telvanni-ruled Sadrith Mora.[19] Furthermore, the Camonna Tong allied with Sjoring Hard-Hart, the Fighters Guild Master in Vvardenfell, and his lieutenants Lorbumol gro-Aglakh and Eydis Fire-Eye. The alliance used the Fighters Guild as an extension of the Camonna Tong's influence, hunting down and eliminating the struggling Imperial Thieves Guild to prevent them gaining a foothold in Vvardenfell.[20] Hard-Heart and his lieutenant's corruption was eventually discovered, and the Fighters Guild Master was slain - though it is unknown if this was the work of the Thieves Guild or an internal cleansing by the Fighters Guild.[21] It is similarly unknown if Hard-Heart's lieutenants were likewise eliminated.[20] However, some rumors claimed Hard-Heart succeeded in eliminating the heads of the Vvardenfell Thieves Guild for the Camonna Tong before he was slain.[22] Additionally, the Tong was viewed negatively by House Redoran and the Tribunal Temple during this time.[23]

Through Orvas Dren, the Camonna Tong controlled Hlaalu Councilors Velanda Omani and Nevena Ules.[24] Though on the outside House Hlaalu seemed the most Imperial minded of the Great Houses, major decisions could not be made unless the Camonna Tong explicitly agreed.[25] The syndicate went so far as to make secret deals with House Dagoth, as their Kingpin had considerable sympathy towards the Sixth House's ideologies.[24] During the fulfillment of the Nerevarine prophecies, the Tong conducted a crackdown on the escaped slaves, even hiring bounty hunters to track down any who would help them.[2] After losing over half the Tong's shipments in rapid succession, Orvas toyed with the idea of having his brother assassinated, so that he might consolidate his power and succeed Vedam as Duke of Vvardenfell and Grandmaster of House Hlaalu.[26] When the Nerevarine needed the backing of House Hlaalu as Hortator, history does not record whether Dren was bribed, persuaded or intimidated into giving him the Camonna Tong's backing, or simply killed in order to break the Camonna hold on House Hlaalu.[25] However, Dren's two chief enforcers, the brothers Ranes and Navil Ienith, were certainly both killed, with both the Thieves Guild and Morag Tong claiming credit for the assassination.[27]

Whatever the outcome, the Camonna Tong remained active for at least six more years, as syndicate thugs were spotted in Cyrodiil collaborating with the Orum gang of Cheydinhal to participate in the Skooma trade in 3E 433.[3]

It is unknown if the Camonna Tong survived the combined calamities of the Oblivion Crisis, Red Year, and Argonian Invasion. House Hlaalu losing its power after the Empire's withdrawal from Morrowind and subsequent loss of Great House status[28] would have been doubtlessly crippling events for whatever remained of the ancient crime syndicate.