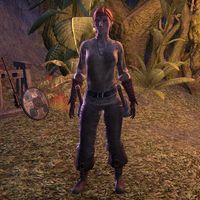 Rena Hammerhands is a Nord who can be found in the Sanguinary Veins area of the Bloodroot Forge. She was enslaved by the Dreadhorn Clan and forced to labor for them within the Forge. In her hatred for the Reachmen who forced her and her kin to labor, she has fallen under the Bloodroot Forge's perverse influence.

She is initially encountered tied up during the battle with Stoneheart, being freed after his defeat. Once the Dreadhorn Clan has been cleared out, she will continue where they left off and resume slaking the Forge's unnatural thirst with the blood of Reachmen. 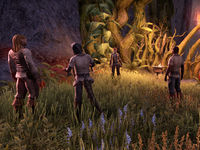 Rena Hammerhands can be first encountered upon her rescue within the Sanguinary Veins, after killing Stoneheart:

You can speak to her:

"You're a godsend. Brought down the wrath of Shor on these crows picking his bones.
You'll find no warriors here, but if the Reachmen are so eager to have their hearts cut out, we're happy to oblige them!"

You should escape while you can.
"You've taken up this fight, but it's our fight! They've robbed and wronged us more than blood can pay, but we'll try!
Drive them back to the Reach, burn their lands, butcher their kin!"
Calm down. What's gotten in to you?
"Calm down ...! I―it's just these monsters getting under my skin. They have to pay for what they've done. They have to be punished! Nords don't suffer this kind of shame!"

These are the weapons the Reachmen are making at the Forge?

"That's right! Red and hot and hungry. Mounds of them to spill our Nord blood!
We'll see how they fair on the skeevers of the Reach and their overgrown cattle! Even that monster Galchobhar!"
Who is Galchobhar?
"A mountain with horns and a heart of stone. One of the first of these beasts with fire in their veins. They thought he'd be enough to keep us timid, but with these weapons we'll carve him up like a New Life roast!"

What is that thundering sound?

"The Forge! The infernal heart of this cursed place. We're close now.
With these weapons we'll drive the Reach-scum into a corner and mash them on the anvil one by one!"

After defeating the Earthgore Amalgam, this exchange will occur:

Filand: "Kyne's breezy hind! What a massacre!"
<Rena and a group of captives enter the forge behind him, she is sniffing the air.>
Rena Hammerhands: "I can smell Reachman blood! Where are they?"
Rena Hammerhands: "Pah! All carved and bled like fattened calves ...! Served up for Sovngarde!"
Filand: "Quick! Cut the others free, before this infernal thing wakes again to drink our blood!"
<The captives scatter to help the others.>
Rena Hammerhands: "Cut them free! And find them proper blades. There's more Reach-dogs where these came from!"
<Filand shakes his head.>
Filand: "No! Toss those wretched things to the fire! It's over, don't you see?"
Rena Hammerhands: "It'll never be done …! Not until every last Reachman has drawn their final breath."

"Grr! Wish I could have crushed their Patriarch's skull myself, but there'll be others!
We'll settle this once and for all soon enough!"
What are you planning?

"To keep the Reachmen out of our lands now and forever! We have the power they woke here and it's given us the means to finally end them! I won't waste it!"
That's extreme, don't you think?

"I've lost a mother and a son to these monsters! It's no different for anyone here. For generations they've done the taking. There's a steep debt to be paid!"

I understand. They brought this on themselves.

"But it was you who delivered us Shor's righteous retribution! It'll be your name we sing to the sound of their cries!"

What is this place?

"Does it matter? It's a curse turned to a blessing! When we learn to stoke the fires as the Reachmen did, we'll hunt their kind to the ends of Nirn!"
That isn't a good idea. This place should stay buried.

"I don't know who built this place, but it was made with a purpose! It wants to be used! It's call echoes louder than your meek words!"

It'd be a shame to let such power be wasted.

"Whoever built this Forge tapped Shor's blood, to answer treachery with his mighty vengeance, I'm certain! We'll honor his name with every stamp of its hammer!"

Your bloodlust. It's not natural.

"Nothing's ever been more natural! I've never felt such purpose! Hunt or be hunted, it's the way of the world—we just forgot in our comforts!"
Lay down those weapons, before you head down a path there's no returning from.

"You would have us lay down our weapons and return to being hunted down like craven skeevers? No! I'd rather die than live like prey again!"

There's some truth to that. Maybe your instincts are right.

"If you'd lived as we've lived, endured what we've endured, you'd have no doubts!
There's only one path from here!"

This Elder Scrolls Online-related article is a stub. You can help by expanding it.
Retrieved from "https://en.uesp.net/w/index.php?title=Online:Rena_Hammerhands&oldid=2243032"
Categories:
Hidden categories: