Atmora (meaning Elder Wood in Ehlnofex)[1] is a continent to the north of Tamriel, and tradition holds that it was from here that the first humans came to Tamriel.[2][3] The name is a corrupted form of the Aldmeris title "Altmora", a designation for the northernmost landmass inhabited by mer.[4] The ancient Nords called Atmora "the land of truth".[5] It is believed to be the ancestral land for all humans,[6]:155 hypothetically including the Nedic peoples, who were the ancestors of the modern Nords, Imperials, and Bretons.[7] 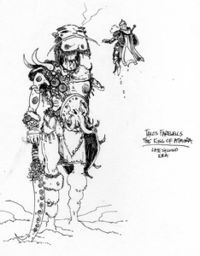 What little is known of Atmora is derived mainly from ancient myths. One creation myth suggests that Atmora was once a part of Tamriel, and became a separate landmass as a result of war among the Ehlnofey.[8] Another Altmeri myth asserts that Auri-El established one of the first Elven kingdoms, "Altmora", there before ascending to heaven.[9] According to Nordic tradition, after men were formed when Kyne breathed onto the Throat of the World, they then migrated north to Atmora.[10] With the help of Shor and others, men eventually overthrew the elves, expelled them from Atmora, and claimed the land for themselves.[9][4]

It is unknown when the Atmorans discovered or rediscovered Tamriel and began to migrate there, only that they came in waves over an extended period of time.[3] For centuries, Tamriel served as a "safety valve" for people who, for whatever reason, could not stay in Atmora.[7] The last known major migration occurred in the late Merethic Era while a civil war raged in Atmora. Many Atmorans, among them the king Ysgramor and his two sons Yngol and Ylgar, departed their homeland and sought refuge from the conflict in Tamriel.[11]

Not long after founding the city of Saarthal, the Atmoran settlers were massacred by the Snow Elves in what became known as the Night of Tears.[11] Ysgramor and his sons escaped and fled back to Atmora, where they assembled the Five Hundred Companions to seek vengeance upon the elves.[11][10] The massive shipyards of the Atmoran port of Jylkurfyk were commissioned to build a fleet that would carry the Companions across the Sea of Ghosts.[12] When Ysgramor and his Companions finally landed at Hsaarik Head on Tamriel's northern coast, they drove the elves from northern Tamriel and then went on to defeat them on the island of Solstheim.[13] The territory the Companions conquered formed the precursor of modern-day Skyrim.

Under the reign of Ysgramor's descendant High King Harald in the second and third centuries of the First Era, Skyrim was consolidated as an independent kingdom. Harald relinquished all of his holdings in Atmora, and Atmoran mercenaries left Skyrim and purportedly returned to their homeland.[7][10] Atmorans would continue to travel to Skyrim over the following centuries, notably including Ysmir Wulfharth, but in declining numbers.[14][15] The last Atmoran "invasion" of Tamriel was recorded in 1E 68, when two Atmoran ships laden with corpses begged to make port in Tamriel.[16] The last purported emigrant from Atmora known to history is Tiber Septim in the ninth century of the Second Era; legends relate that he sailed to Skyrim and spent his youth among the Nords.[17][18]

It was around the time of Ysgramor's migration that Atmora began to undergo an inexplicable shift in climate, the harbinger of the continent's demise.[19] Once known as a green, albeit colder land, Atmora was gradually overcome by "the frost fall" and rendered largely uninhabitable,[10][16] becoming a "frozen continent".[20] There is some suggestion that, as of the early Third Era, Atmora was still inhabited,[21] but expeditions there in the mid- to late-Third Era only found a place of permanent winter with little life and no sign of human habitation. It is believed that Atmora no longer supports any civilized life, and those people who did not leave it for Tamriel ultimately succumbed to the ever-worsening climate.[16] The freezing gales coming from Atmora could be felt as far as Skyrim.[22]

Early Nordic society is reflective of Atmoran society. Many Nordic customs were inherited from Atmora, and the continent's culture has been highly influential on Tamriel.[16] Atmorans were a sea-faring people, though they purportedly had no knowledge of agriculture and survived off of hunting. The Atmorans were purportedly engaged in ceaseless warfare.[7][16][23] Atmorans were also a pre-literate society and lacked a formal writing system of their own; Ysgramor is credited with developing a runic transcription of Nord speech based on Elvish principles, and is consequently considered the first human historian.[11] While Atmorans were considered one race, it is implied that there were regionally-distinct racial groups, such as the "sinewy long folk" whose "ruddy skin matched the dawn" that inhabited the eastern edge of Atmora.[24]

Atmoran settlers of Tamriel brought with them traditions such as naming ceremonies and their religion of animal worship.[12][25][26] They deified the hawk, wolf, snake, moth, owl, whale, bear, and fox, but preeminent among all animals were the dragons.[26] At the height of the Dragon Cult's influence, before the Dragon War, the dragon priests held as much power as kings, ruling in the stead of the aloof dragons they worshipped. In Atmora, the priests demanded tribute and set down laws and codes of living that kept peace between dragons and men. In Tamriel, however, they reigned as tyrants and made virtual slaves of the rest of the population.[26] Atmorans also passed down myths involving demons, especially Herma-Mora, "the Woodland Man", who would become a part of the Nordic pantheon.[9]

Though a cold continent, Atmora had marshes in the east[27] and forests with running streams.[28]

Atmoran Frostwood
A forest where much game was hunted by Ysgramor[28]
Atmoran Strait
A body of water in the Sea of Ghosts, where Yngol and the crew of the Harakk drowned in the Storm of Seperation[29][30]
Forelgrim
The native home of the White Stag[28]
Jylkurfyk
The largest port on the whole continent
Shivering Glacier
In myths it was here that Shor carved a record of his victory over Sneggh and was where Ysgramor wrestled down a chub loon[28][31]

Giants are suggested to have also originated from Atmora,[32] supported by when Ysgramor met Giant-Wives there[28] tales of ancient giants and Atmoran titans.[33] The animals that provided the basis for Atmoran talismans, such as bears, wolves, owls, moths, hawks, whales, and snakes, are believed to have lived on the continent. Hares and foxes also lived there.[28] The Chub Loon is native to the land of Atmora, and according to Nord legend is much larger, standing as tall as two warriors and with a "squawk that starts avalanches".[31] Atmoran Bantam Guars are fur-less, cold-blooded reptile with icy blue eyes suspected to possibly be found there.[34] According to Nord legend, bears originated on the continent of Atmora, leading some to suspect that the Psijic monks went there to find the original model of their Psiiic Bear Exemplar.[20] The fiercely noble Atmoran Snow Bears have friendly demeanors while they are young,[35] and are said to have been brought from Atmora by Ysgramor himself, who deemed them the "only worthy avatars" of the ancient Nord Bear totem.[36]