:"13th in the line of Ysgramor and founder of the great Kingdom of Skyrim, where he established fair Windhelm as his capital."
— The Memorial Plaque in Windhelm

King Harald (also called Harald Hand-Free[1] and Harald of Ysgramoor)[2] was the High King of Skyrim and the thirteenth monarch descended from Ysgramor. Harald was the first historical Nord ruler, appearing at the beginning of recorded history. He is mainly remembered for relinquishing all holdings in distant and lost Atmora and united the disparate Nordic people to formally create the Kingdom of Skyrim. Harald's newfound power gave the human races the inspiration to expand their reach across Tamriel and assert themselves over the dominance of elves.[3] 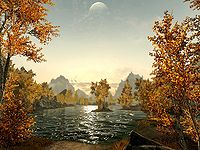 Harald was born in the early years of the First Era, in 1E 113[nb 1] he was the descendant of the fabled mythic-hero, Ysgramor the Harbinger and member of the Ysgramor Clan. In fact, he was the 13th in line as the leader of Skyrim,[3] preceded by many figures whose names have yet to be known and their existence is speculated at best.[4] Before he ascended the High Kingship, Lord[nb 2] Harald led a campaign to drive out the remaining Snow Elves in Skyrim. In 1E 139, the Nordic forces led by Skorm Snow-Strider push back the elves from across Lake Honrich in the 13th of Sun's Dusk. The army eventually made their way to Forelhost where they discovered a secret enclave of the Dragon Cult, still active by the 27th. The siege lasted for several days and there was little progress. A request was even sent to Harald for tongues available to breakdown the fortress. The siege ended in 1E 140 on the 6th of Morning Star after the cult committed mass suicide and the Dragon Priest, Rahgot was entombed.[5]

Harald became the High King of Skyrim in 1E 143.[6]:5 His ascension to the throne proved to be pivotal to the history of man on Tamriel. He relinquished the last remaining holds in Atmora and centralized the region into a singular state, the Kingdom of Skyrim. The Nords expanded their reach further across the land and the line between the man and the mer became much more clear.[3] The newly-founded Skyrim had began to expand with the military might.[4] Harald was the figurehead of the new age of man and felt that his people must adapt from their Atmoran roots while embracing them. He sought to create a more uniform army of warriors, but even tales of grandeur were created from this time.[7] He commissioned every craftsworker to create new weapons and armor for the first army of Nords. This first domestic time of peace meant that ash palisades and wooden fortifications were torn down for recurve bows and arrows.[8]

In the early years of his reign, he was confronted by one of Skyrim's greatest heroes at the time, Randagulf of Clan Begalin. He defeated the warrior and took his fists, both as a trophy and out of respect for the hero.[9] According to some sources, the Jagged Crown was forged by Harald himself, using the bones and teeth of dragons to create a crown that symbolized his newfound power.[10] Although it is unclear if he actually made it, or that it preceded even him.[11] There have been many things introduced in Harald's reign that have been used in modern-day Skyrim. Sometime around 1E 184, he hosted the very first Moot in his mead hall in Windhelm.[12] It had been in effect for many years until it was essentially partisan and ineffective by the time of Borgas' reign.[3]

At some point in his reign, his kingdom was under threat when Gauldur, an esteemed Arch-Mage, who was killed by his sons Jyrik, Mikrul, and Sigdis, who stole his prized amulet and wreaked havoc across the countryside. King Harald sent the kingdom's greatest warriors to chase these three brothers and destroy them, including his personal battlemage, the Arch-Mage of Windhelm, Geirmund. The Clever Man pursued them across the land and managed to execute each of them. He first cornered the youngest, Mikrul at the old barrow of Folgunthur, where he sealed him deep in the tomb. The oldest, Jyrik was trapped in the half-buried city of Saarthal. An epic battle ensued between Jyrik Gauldurson's elemental magic and ten master wizards, but he eventually fell into the inescapable abyss. In the end, Geirmund confronted the middle child, Sigdis on an island near the small town, Ivarstead. Sigdis challenged the Arch-Mage to a duel of iron might, clashing in equal strength until they fell together. Harald ordered a tomb built in the middle of the lake, where Geirmund would guard Sigdis' tomb for eternity.[13]

In the end, Gauldur was buried in a hidden tomb somewhere in the Reach, not far from his own tower. King Harald issued a royal edict in which the Arch-Mage and his sons were stricken out of any sort of records, essentially erased from history. Anyone that would speak about the incident or even attempt to recover the Gauldur Amulet would be put under death.[13] Despite this, Gauldur's story had been preserved in some form through scarce sources, but even in the Fourth Era, no Skald or Bard would dare speak about this lost legend.[14]

Later Years & After his Reign[edit]

The Horned Helmet aesthetic was revolutionized by Harald's armies

Harald had lived for an unexpectedly-long time, dying at the earnest age of a hundred and eight and outliving his children, with the exception of Hjalmer, Olmgerd, and Vrage.[3] When time came for another heir to claim the throne, it was passed onto his eldest son, Hjalmer. However, his reign lasted a year and it was soon passed to his second child, Vrage the Gifted.[6]:5 Vrage's reign over Skyrim further expanded on Harald's own innovations and soon the northern realms of Tamriel were under his command. It was said that Harald's sons dominated the northern coast of what was then called Resdayn. His bastard-son, Olmgerd the Outlaw partook in the Conquest of Morrowind and later died in battle. He was buried in the undersea cavern of Tukushapal and given the burial that befits a son of Harald.[1] The time in which Vrage passed away is currently unknown, but his empire would continue to thrive on until its demise in the fifth century of the First Era.[3] His heirs had been harassed by the God of Orcs, Mauloch for many years until his defeat at the Battle of Dragon Wall sometime around 1E 660, concurrent with Sun's Death.[15]

Harald's fixation on improving Nordic arms served as the inspiration for the modern-day weapons and armor of Skyrim. He had placed an emphasis on practicality when it comes to the equipment. The leg greaves for example, were designed proportionally, unlike what was seen in High Rock at the time.[7] The belt were given the insignia of the wearer's clan sigil, but Harald had to approve every single one of them[8] and some did not appeal to him. There were family rivalries fueled during this time.[7] The shields were designed to be thick but light, taking inspiration from Atmoran longboats.[8] They were made to be buoyant to expel fears of drowning and were said to even break elven cuirass with full force.[7] Harald's army uniform was the one to make the horned Nordic helm style part of Nordic culture. However, the best sized horns had yet to be determined at the time.[8]