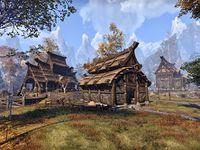 Ivarstead (also known as Hillgrund's Steading) is a small milling town located at the eastern base of the Throat of the World, on the western edge of the Rift and the western shore of Lake Geir. Pilgrims and travelers often pass through, as the town is located at the beginning of the 7,000 Steps to High Hrothgar. Ivarstead is near a nordic barrow known as Shroud Hearth Barrow.

During the reign of Jarl Gjalund of Whiterun, it was part of Whiterun Hold and exported grain, mead, and honey.[1] It was in a field by this town during the reign of High King Harald that Archmage Geirmund dueled the criminal Sigdis Gauldurson. Both were slain, and both were interred on a small island on Lake Geir, east of the town.[2]

Ivarstead was a quiet town during 2E 582, with most of its inhabitants being farmers, fishermen and general laborers.[3] The town also had its own town guard.[4] However, sometime during this period, a necromancer by the name of Jakalor began to capture inhabitants of the village to experiment on, he was stopped by the Vestige, which saved Ivarstead from being wiped out.[5][6] The Vestige also killed a giant known as Cracktooth, who had been killing unaware visitors to Ivarstead due to a Bosmer criminal known as Nilwen sending them to their deaths under the pretense that Cracktooth was just a goblin.[7] Ivarstead was also still a commonplace for pilgrims during this era before they went up the 7,000 Steps.[8]

Ivarstead in 4E 201 was in decline due to a decrease in visitors due to people moving to Riften and the supposed haunting of Shroud Hearth Barrow[9], this haunting turned out to be a Dunmer treasure-hunter using a potion to make himself appear spectral to scare off the inhabitants of Ivarstead so he could search the Barrow. He was killed by the Last Dragonborn and the town was informed that there was no ghost.[10] The town's sawmill owner also had problems, with bears in the area ruining lumber by scratching it to bits, the Last Dragonborn helped with this problem by thinning the numbers of the local bear population.[11] A Nord known as Klimmek made deliveries of supplies to the Greybeards from time to time, but became more hesitant to climb the steps in his old age, and asked the Dragonborn to make the delivery for him.[12]