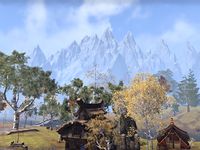 The Throat of the World (Monahven in the Dragon Language[1]), also known as Throat Mountain[UOL 1], is the highest peak in the province of Skyrim. Though once considered second to Red Mountain,[2] it is now known as the highest mountain in all of Tamriel.[3] Seven thousand steps lead up the mountain to its summit, where the settlement of High Hrothgar is located, and where the Greybeards live their lives of absolute silence.[2] King Wulfharth is said to have rebuilt the 418th step.[4]

The legends of the Nords state that mankind was formed on the mountain when the sky breathed onto the land.[5] Many pilgrims travel to the mountain and climb the seven thousand steps to its peak.[2]

During the Dragon War, the great dragon Alduin was lured to the top of the mountain by a group of Nords, instructed by Paarthurnax on the use of the thu'um. After seeing that they could not defeat him, even with the Dragonrend shout, the Nords sent him forward in time using an Elder Scroll. The event created a hole in time itself atop the mountain, called the Time-Wound, or "Tiid-Ahraan".[1][6]

"Throat of the World" is inextricably intertwined with "Nord", to the point where the term is used to refer to the nation of Skyrim in general.[5][7] Part of The Prophecy of the Dragonborn mentions the "Snow Tower" lying "sundered, kingless, bleeding". The true Snow Tower is actually a metaphysical concept, though the mountain might be considered a physical echo.[UOL 2] As the prophecy suggests, the Snow Tower is better understood as the Nordic people.