Alduin, known as both the World-Eater and the Twilight God to the residents of Skyrim, is an immensely powerful black Dragon. He is depicted as a malevolent force who destroys the world periodically, and the Nords believe that his reappearance heralds the end of time.[1] He is the self-proclaimed First-Born (and supposedly an aspect) of Akatosh.[2][UOL 1]

His name can be separated into "Al Du In", which means "Destroyer Devour Master" in the Dragon Language.[3]

To the Ancient Khajiit, he is a Wandering Spirit known as Alkhan, The Scaled Prince, and the Firstborn of Akha. Texts that predate the Riddle'Thar Ephiphany claim that Alkhan was born when Akha bred with a demon of fire and shadow. Alkhan grew in size with each soul he ate, and ever hungered for the crown of Alkosh. He was slain by Lorkhaj and his companions, but will return one day along the Many Paths. Lorkhaj, Khenarthi, and Alkosh consider him to be an enemy.[4] 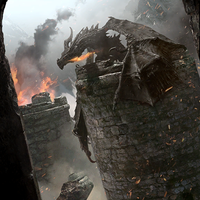 According to Paarthurnax, Alduin's younger sibling and chief lieutenant for much of the ancient Dragon War,[5] Alduin was once considered the greatest of Akatosh's creations.[2] According to the writings of Archmage Shalidor, dragons had existed since the advent of time, but were initially as wild as anything else. It was Alduin who created their civilization.[6] One legend says that Alduin can "eat" away the age of his victims, and that his ghost once ate the entire Nord population down to age six after being summoned by Orkey.[7] This legend is somewhat grounded in reality, as Alduin feeds on the souls of the dead in Sovngarde, a privilege he guards jealously.[8]

Imperial scholars concluded that though Alduin was the wellspring of Nordic pantheon, he was not a chief deity (that position belonging instead to Kyne), instead, he is a perpetrator of a grim cycle where he destroys the previous world to enable the creation of a new one.[9] This view was shared by Nords during the Second Era, who saw Alduin as the god of time (thus the same as Akatosh) and were disturbed by the fascination of Imperials with the deity.[10] This view had been changed by the Fourth Era, as many Nords insisted that the belief he is some sort of Nordic version of Akatosh is a false one perpetuated by foreigners who misunderstood Nordic oral traditions.[8][1][11][12]

In his arrogance, Alduin had strayed far from the righteous path in favor of conquering Mundus.[2][13] It was Alduin's increasingly tyrannical ways that convinced Paarthurnax to start a rebellion together with Nordic allies and some Dragons.[2] Paarthurnax instructed several of them on how to use the Thu'um, which they used together with an Elder Scroll to bring about Alduin's defeat by flinging him forward in time.[2][8] Groups such as the Dragonguard and Greybeards made sure to preserve his legend so the people of the future would remain wary.[14]

In 4E 201, Alduin reappeared near the Throat of the World, from where he had been banished thousands of years before, and decimated the town of Helgen.[8] The resulting escape of Ulfric Stormcloak prolonged the civil war in Skyrim and secured for Alduin a steady flow of souls to be consumed in Sovngarde. As the World Eater set about resurrecting dragons loyal to him, the Last Dragonborn was revealed and sought to stop him.[8] Though the Dragonborn took the souls of many of Alduin's soldiers and learned a shout that forced Dragons to experience mortality, their leader proved to be seemingly invincible in Mundus.[8] Eventually, the Dragonborn gained access to Sovngarde and together with the help of heroic Nordic spirits finally vanquished the wyrm.[8] Alduin's soul was not absorbed by the Dragonborn,[8] and he may not have been completely destroyed. It is possible that Alduin will one day return to fulfill his role as World-Eater.[15]