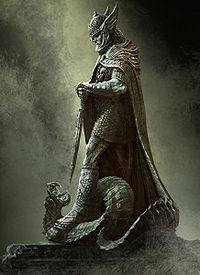 Heir to the Seat of Sundered Kings, Talos is the most important hero-god of Mankind. In life, he was Emperor Tiber Septim, who conquered all of Tamriel and founded the Third Empire, ushering in the Third Era. Talos, meaning Stormcrown in the old Ehlnofey, is the name given to him at birth in Atmora.[1] Also called Ysmir, 'Dragon of the North', and General Talos. He is also referred to as 'the Grey Wind' and 'the Storm of Kyne' by the Greybeards.[2]

Tiber Septim died in 3E 38,[3] and it is believed he ascended to godhood and became the ninth aspect of the Nine Divines, the major gods of Tamriel. These gods are alternatively referenced as the "eight and one" because of his distinct origins, the eight other Aedra arising from the interplay of Anu and Padomay before the creation of the Mundus or man.[4] The Divine Talos is the patron of questing adventurers, warriors, and generals, and was perhaps the most glorified god of human races, as Tiber Septim was a man and united much of the lands now comprising the Empire. Less prominent sects, such as the Talos Cult, have also been devoted to to the worship of Talos. Tokens commonly associated with the original Eight Divines were hybrids of Nordic and Aldmeri gods, often thought to be the same entities (i.e. Auri-El and Akatosh).[5] The apotheosis of Talos, therefore, has stirred conflict in some elven provinces, particularly to the Altmer, who do not glorify Talos as the Human races do because he conquered the Aldmeri Dominion with Numidium in 2E 896, which caused resentment toward Talos as a god in particular.[2] In the Fourth Era, worship of Talos was banned as a result of the White-Gold Concordat between the Aldermi Dominion and the Empire, with the Dominion claiming that a man couldn't achieve apotheosis.[6] This ban of worship caused the Stormcloak Rebellion that erupted into the Skyrim Civil War, led by Ulfric Stormcloak.

The name Ysmir has also been associated with avatars of the Nordic god Shor including Pelinal Whitestrake and the Underking, Ysmir Wulfharth.[2] Talos himself has also taken avatar form as Wulf, which may or may not be a coincidentally similar name to Ysmir Wulfharth.

The levitating Boots of the Apostle are attributed to the Emperor, though it remains veiled in mystery.[7] The Armor of Tiber Septim has also supposedly had important influence on Tamriellic history.

This Lore-related article is a stub. You can help by expanding it.
Retrieved from "https://en.uesp.net/w/index.php?title=Lore:Talos&oldid=2751860"
Categories:
Hidden categories: