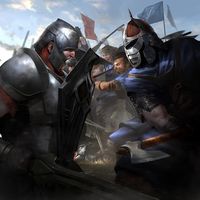 The Stormcloak Rebellion was a civil war in Skyrim fought between the forces of the Empire, mobilized in western Skyrim, and the Stormcloak rebels of eastern Skyrim, in 4E 201. Many years beforehand, Jarl Ulfric Stormcloak of Windhelm formed the Stormcloaks as his personal army to carry out his agenda. Soon after the young Torygg was appointed High King by the Moot and ascended to the throne of Skyrim, Ulfric traveled to the High King's court in Solitude and challenged Torygg to single combat for Skyrim's throne, in order to secede from the Empire. Ulfric killed Torygg with the Thu'um, after which he stabbed with a sword, and fled the city. He was branded a murderer and traitor by the Empire.

The Imperial Legion under General Tullius moved in to secure Imperial territory as the jarls began picking sides. On the 15th of Last Seed,[nb 1] less than a year after the start of the conflict,[nb 2][nb 3] Ulfric and his men were ambushed by the Legion outside Darkwater Crossing in southern Eastmarch. After surrendering, they traveled for two days until they arrived in Helgen for execution.[1] In a twist of fate, the village was suddenly attacked by the dragon Alduin, and the rebel leader escaped. Afterwards, the war escalated, with Nords across Skyrim solidifying their allegiance to either the Empire or the Stormcloaks.[2] The victor of the war is unknown.