Under the leadership of the Slave-Queen Alessia, the enslaved proto-Cyrodiils rebelled against their Ayleid overlords. The legendary nomad-warrior Pelinal Whitestrake dealt the final blow when he killed Umaril the Unfeathered in White-Gold Tower. However, Pelinal died along with the Ayleid king, cut into eighths in mockery of the Divines by the Ayleids, who were obsessed with this number.[5]

The victory, while extremely beneficial to the proto-Cyrodiils, signaled the slow decline of the Ayleid race's power, which would end around 1E 500, after the Late Ayleid Period.[4]

A series of military expansions conducted by Darloc Brae, the Golden Beast of Anequina. The period is perceived as glorious by the Khajiit, with the loot from the Conquests used to advance the greatest of the Golden Beast's architectural projects. At the height of the Anequine Conquests the borders of his realm went as far as the Strid River in the west, with Khaj Rawlith being the westernmost point, to the Larsius River in the east, encompassing all lands between Arenthia and Rimmen.[9]

After the Snow Elves were defeated by the Nords during the Late Merethic Era[10] and driven from Skyrim, they sought refuge with the Dwemer in the caverns of Blackreach. The Dwemer agreed to help, but only if the Snow Elves would eat a toxic fungus which rendered them permanently blind. They betrayed the Snow Elves and forced them to serve as slaves. Generations later, the Falmer rebelled against their Dwemer masters, beginning a long and bitter conflict that raged completely unbeknownst to the Nords living on the surface above. After decades of bloodshed, the war ended with the abrupt disappearance of the entire Dwemer race. The newly free Falmer spread throughout Blackreach and other Dwemer ruins, and eventually began mounting raids to the surface.[11]

Also called the War of the Red Mountain.[12] The secular Dwemer waged war against the Chimer Great Houses, as well as the nomadic Ashlanders of Vvardenfell, who had united under General Indoril Nerevar.[13] The Nords of Skyrim under High King Wulfharth also entered the fray, seeking to reclaim Morrowind amidst the chaos and restore the First Empire of the Nords.[14] In the aftermath of the final clash, known as the Battle of Red Mountain, the Dwemer had mysteriously disappeared, Nerevar was dead, House Dagoth was dissolved and assimilated into the other Houses, and a new religion was born revering the living gods of the Tribunal and later cursing Voryn Dagoth, the former High Councilor of House Dagoth, as the devil incarnate.[13]

The war is said to have coincided with the Sun's Death of 1E 668, a cataclysmic eruption of Red Mountain that devastated Morrowind, tainted the skies with ash, and blotted out the sun for a year.[15][14][16] Other sources claim the war occurred in or around 1E 700.[12] 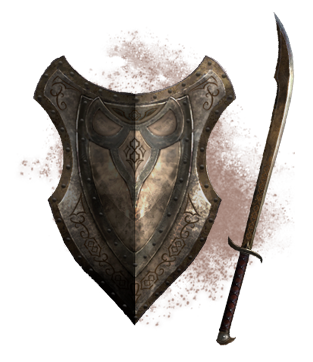 Main article: Orsinium § The Siege of Orsinium
In response to the Orcish threat to the Kingdom of Wayrest, a Breton–Redguard–Yokudan alliance was formed which, after a campaign of more than 30 years, destroyed the First Orsinium in the Wrothgarian Mountains.

The War of Righteousness was a decade-long conflict that led to the dissolution of the Alessian Order and with it the Alessian Empire. The main cause of the conflict is believed to have been internal strife within the Order itself, brought about by the unsustainable expansion of the priesthood. Several of the Empire's territories took the opportunity to distance themselves from the Order or break away entirely. When Western Cyrodiil isolated itself and established an autonomous government, the Colovian Estates, the simmering tension among the Order erupted into open warfare.[19]

While there is no information about how or by whom the war was fought, there are some details about the destruction it caused. Reportedly, half of the contemporary population of the Iliac Bay was wiped out in the violence, and the Alessian Order's great monastic complex at Lake Canulus was razed.[6][20][17]

In the first major interaction between Akavir and Tamriel, a large Tsaesci armada landed on the northern coast and marched through Morrowind and Skyrim to the Jerall Mountains, defeating all in their path.[22] However, by landing in Morrowind, the invaders had arisen the anger of Vivec, who allied with the Trident-Kings of the Dreugh to attack from behind, cutting off the Akaviri supply lines and their route to the sea.[23] They were brought to a halt by lack of supplies and set up headquarters at the defensible Pale Pass, where they were met by the forces of a united Cyrodiil under the command of Reman.

Reman's army had only begun to advance into the mountains when the entire Akaviri force abruptly surrendered, kneeling before him and saying they had found what they came to Tamriel to seek.[22] Reman integrated many of the Tsaesci veterans into his own armies, and his personal service, and used them to great effect in his subsequent campaigns which resulted in the Second Empire.[22][24]

A military expansion ordered by Reman II, which seized the northern and eastern marches of Argonia, resulting in the formation of the Imperial Province of Black Marsh. While the Imperial forces won several decisive battles in the early stages, their progress quickly stagnated due to the brutal terrain, endless raids, disease, and mysterious disappearances. After several failed campaigns, each employing wildly differing tactics, the conflict declined into a protracted and complex guerrilla war with no clear victor in sight. Ultimately, tribal infighting on the part of the Argonians finally brought the war to a close. Rather than an official armistice, the war simply ended when the Argonians abruptly buried their weapons and went back to their day-to-day lives.[25][26]