The UESPWiki – Your source for The Elder Scrolls since 1995
< Lore: People: R / Gods: R
Jump to: navigation, search

Reman Cyrodiil, called the Worldly God, was a cultural god-hero of the Second Empire, founder of the Reman Dynasty, and the greatest hero of the Akaviri Trouble of 1E 2703.[1][2][3] His name, Reman, means "Light of Man".[4] Contrary to popular belief, the province of Cyrodiil was not named after him; rather, he adopted the ancient Ayleid name for the province, Cyrod, as his surname.[5][6] 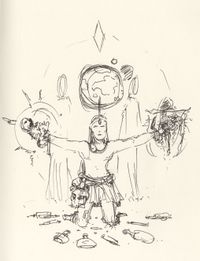 Little is known for certain about Reman's early life and ancestry. Remanada describes Reman as the product of a union between King Hrol (who was killed in the union) and the spirit of St. Alessia (who was considered to be the land itself), and some other sources seem to corroborate this, though skeptics suspect that this heritage was a fabrication intended to legitimize his rule.[7][8] The text goes on to say that Sancre Tor means "Golden Hill", and that it is the place where Reman was conceived and born. He was reportedly found there by a shepherdess with the Amulet of Kings, a soul gem of immense power, embedded in his forehead. She carried the infant directly to the White-Gold Tower and placed him on the throne without contest.[4] During a duel which is believed to have taken place at Sancre Tor over 2,500 years before Reman's birth, Pelinal Whitestrake purportedly screamed out the future leader's name.[6]

The invasion of Tamriel by forces from the continent of Akavir is what first allowed Reman, called a "son of the West", to unite many disparate factions under his leadership.[1] Many of the old forts and castles in Skyrim are remnants of the network of fortifications Reman had built to defend against Akavir.[9] Reman not only stopped the foreign invaders, he convinced them to help him build his own empire, by which he later conquered all of Tamriel except for Morrowind.[1][2][3] The Akaviri were the first to acknowledge him as Dragonborn. In fact, it was the Akaviri who did the most to promote his standing as Emperor (although Reman himself never took that title in his lifetime).[8] They had apparently been searching for Dragonborn, and when they heard Reman's voice during the climactic battle at Pale Pass, they realized what he was, knelt, and swore fealty to him resulting in the formation of the Dragonguard.[10]

The formation of Cyrodiil as it is known today is credited to Reman, who incorporated aspects of High Rock, Colovia, the Nibenay region, and the sophisticated if strange culture of the defeated Akaviri into a common whole.[11] He instituted the rites of becoming Emperor, which included the ritual geas to the Amulet of Kings.[2][3]

After thwarting the Akaviri invasion in 1E 2704, he turned his attention to the Reachfolk. He divided the geographical Reach between the Imperial provinces of High Rock and Skyrim to reduce the power or incomes of any individual ruler, and the Western Reach has existed as a separate entity ever since. Despite this, the Reach failed to be tamed, and not a decade passed without troops from either Evermore or Solitude marching into the Reach in another vain attempt to bring the Reachmen to heel.[12] Emperor Reman's Dragonguard also built Sky Haven Temple in the mountains of the Reach to support their crusade against dragons.[13][14]

He died in 1E 2762 by some accounts at the hands of the Morrowind guild of assassins, the Morag Tong.[UOL 1] He was subsequently buried in Sancre Tor, which had enjoyed a resurgence of wealth and culture under his rule.[15][16] After two hundred years of rule, his dynasty ended with the assassination of his last heir, Reman III (purportedly at the hands of the Morag Tong), bringing about the end of the First Era.[1][2]

1.As the figure in the coin resembles the bust of Reman found at the entrance of Sky Haven Temple, it is possible that the figure is a representation of Reman I, in the same way that coins minted during the Third Empire contained a profile portrait of Tiber Septim.