This article is about the geographical region. For the cultural-political area, see Nibenay. 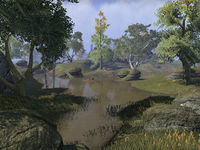 Bergamot grows particularly densely around Bravil, as does Mandrake and Nightshade. The eastern bank of the Niben River is thick with Foxglove, Monkshood, and Summer Bolete. Many other plants thrive in the region, including Nirnroot.

Olive wood of the Niben Valley is commonly used by the House Hexos in the process of crafting weaponry.[2]

Over the course of the Skyrim Conquests launched by High King Vrage the Gifted in 1E 240, the Nords expanded across northern Tamriel. By the end of the half-century campaign, the First Empire of the Nords had annexed, among other regions, a "deep stretch" of the Nibenay Valley. This territory remained under Skyrim's control until the War of Succession resulted in the collapse of the Nords' Empire by 1E 420.[3]