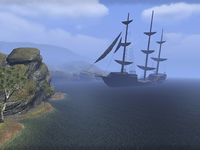 Niben Bay is a large body of water lying in the Nibenay Basin, largely east of the city of Bravil.[1]

It lies across the Niben River, splitting it into two parts, upper and lower, and so is technically a lake rather than a bay, which means that the Khajiit name for the bay, Lake Makapi, is more accurate.[2] In addition, the Larsius River, the Corbolo River, the Silverfish River, and the Panther River all empty into Niben Bay.[1]

In 3E 433 a floating island appeared in the bay, on which a door to the Shivering Isles was opened by Sheogorath in his search for a champion.[3]

This Lore-related article is a stub. You can help by expanding it.
Retrieved from "https://en.uesp.net/w/index.php?title=Lore:Niben_Bay&oldid=2034013"
Categories:
Hidden categories: