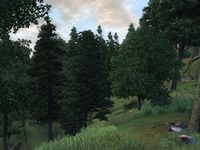 The Great Forest is an immense crescent-shaped geographic woodland region in Cyrodiil that extends around the Heartlands, starting just northeast of the city of Bravil to the south, around the western border of the Heartlands, ending just west of Cheydinhal to the north. The outer edge of the Great Forest is bordered by the West Weald to the south, the Colovian Highlands to the west, and the Jerall Mountains to the north. The city of Chorrol lies along the western border of the Great Forest and is the only city in this region. The terrain consists of rolling hills, and the region is dotted with caves, mines, abandoned forts, Ayleid ruins and Daedric shrines.[1]

Hircine is said to appear in the Great Forest during the month of Rain's Hand in the form of the Great Dark Ram, a large black goat with red eyes.[2]

Circa 2E 582, the effects of the Planemeld were evident in parts of the Great Forest with at least one known dolmen being present in the area.[3]