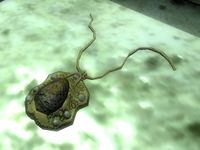 The Stone of St. Alessia

The Stone of St. Alessia is a relic sacred to the Church. It is a holy stone believed to have been blessed by Saint Alessia herself.[1] The stone has been set in a pearl-encrusted golden amulet,[2] which has historically been kept in the Great Chapel of Talos in Bruma.[3] Adherents believe that while the stone remains in the possession of Bruma's Great Chapel, no harm may come to the church.[1]

Circa 3E 433, a group of bandits entered the Great Chapel at night and stole the stone. However, they were soon set upon by hostile ogres on the outskirts of Bruma, who were attracted by the "pretty gems". The ogres killed all but one of the bandits and brought the stone back to their underground lair at the Ayleid ruins of Sedor, where it was put on display.[4] The Fighters Guild was contracted to retrieve the stone, and the Champion of Cyrodiil duly tracked it down to Sedor and wiped out the ogres in order to recover it. It was subsequently returned to the possession of Cirroc, the chapel healer.[3]