The UESPWiki – Your source for The Elder Scrolls since 1995
< Lore: Gods: Z
Jump to: navigation, search 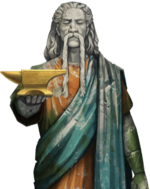 Zenithar, the God of Work and Commerce, the Provider of our Ease,[1] is one of the Divines.[2][3][4] The Trader God is frequently seen as the same deity as the Bosmeri god Z'en.[5] In the Empire, however, Zenithar is considered a more cultivated god of merchants and middle nobility, being the deity of wealth, labor, commerce and communication.[5][6]

He has strong ties to Cyrodiil and High Rock.[5] The introduction of the worship of Zenithar was largely tolerated in Hammerfell due to his similarities to a Yokudan agricultural deity.[7] His worshippers say that, despite his mysterious origins, Zenithar is the god 'that will always win'.[5] His priests teach that the path to peace and prosperity is through earnest work and honest profit, not through war, bloodshed, or theft.[8] Zenithar is seen as a warrior god, but one who is restrained and reserved in times of peace.[9][10]

He is thought to be associated with Kynareth,[11] as well as a large blue star sometimes seen in the skies of Tamriel.[12] It's also said that he is most in touch with the mortal world, and that he created the Mace of the Crusader for Pelinal Whitestrake to help him defeat Umaril the Unfeathered.[13]

Temples devoted to him are sometimes called Resolutions. Worship of Zenithar is typically more prevalent in some geographic areas, such as Leyawiin, Totambu, and Kambria.[3]

A blacksmith's anvil is his symbol, representing labor and production. The Daggerfall Merchant's Guild is known to award small golden anvils in Zenithar's name to upstanding members.[15] Worshippers of Zenithar often keep small devotional anvils in their homes and pewter scale weights engraved with a blue star in the coin purses for financial luck in trying times.[16][17]

One form of an offering to Zenithar is to burn crops at a shrine of him to offer thanks for prosperity.[18] They also use special prayer beads to call forth good luck and success in all types of negotiations.[19] 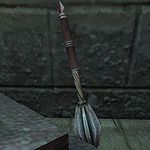 The Mace of the Crusader

The Mace of the Crusader (also known as the Mace of Zenithar) was created by Zenithar. Those it strikes are burnt by holy flames, and it has the ability to turn the undead. According to legend, when Pelinal Whitestrake was slain, a messenger carried the mace to the settlement of Leyawiin. Centuries later, the master craftsman Saint Kaladas built the Great Chapel of Zenithar to honor the legend. When Kaladas died and was entombed in the Chapel, those who prayed to him began to receive visions of the mace. In the vision, the mace can be seen in the distance, separated by a void. The void symbolizes doubt, and an inscription on the tomb says to "walk in the faith". Sir Ralvas of the original Knights attempted hundreds of times to reach the mace, but failed each time. The pilgrim later discovered that the Boots of the Crusader are needed to cross the void; Zenithar has close ties to Kynareth, as craftsmen need to take resources from the natural world. With the boots, the path of faith was illuminated, and the pilgrim recovered the mace.[20]

Zenithar's Warning and Zenithar's Wiles are a pair of gloves that have magical effects such as reducing an adversary's ability and willingness to fight, and increasing people's disposition towards the wearer.[21]