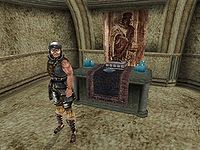 "We are those who worship the true following of the Legions. Protecting the Glory of Tiber Septim, Talos, the Dragonborn."[1]

The Talos Cult is a fringe group[1] that reveres Tiber Septim, founder of the Third Empire[2] who apotheosized to become the divine Talos.[3] They have many followers within the Imperial Legion.[1]

Circa 3E 427, members of the Talos Cult began a conspiracy to assassinate Emperor Uriel Septim VII during a rumored visit to Vvardenfell due to his perceived weak rule. They began to recruit new members from the Deathshead Legion garrison in Gnisis, requiring them to swear an oath to give up their lives in attempting to put a strong man back on the throne of Tamriel.[4] This was prevented by the Nerevarine, who executed the conspirators by order of the Imperial Legion.[5]