The UESPWiki – Your source for The Elder Scrolls since 1995
< Lore: Gods: K
Jump to: navigation, search 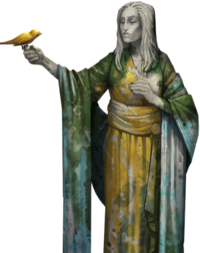 Kynareth is the goddess of the heavens, the winds, the elements, and the unseen spirits of the air.[1][2] She is a member of the Eight/Nine Divines and Patron of sailors and travelers.[3] Kynareth is often invoked for auspicious stars at birth and for good fortune in daily life. In some legends, she is the first to agree to Lorkhan's divine plan to create the mortal plane, and provides the space in the void for its creation. Furthermore, she is associated with rain, a phenomenon that is said not to have occurred before the removal of Lorkhan's divine spark.[4]

Kynareth is the mother of the demigod Morihaus, she is also suspected to have communicated with Saint Alessia through visions of Pelinal's imminent arrival.[5] The Throat of the World is described as being Kynareth's sacred mountain by the Greybeards.[6]

According to followers of the Divines, the Sky Goddess Kyne, worshipped by the Nords as the strongest of the Sky spirits and the widow of Shor, is the Nordic aspect of Kynareth. Rain is said to be Kyne's tears as she mourns the loss of her beloved Shor, since rain is believed not to have appeared until after his divine spark was forcibly removed.[4] It is said Kyne gifted men with the thu'um so they could harness the language of the dragons and use its power to save themselves from the wrath of Alduin and the dragons. Kynareth has a temple in the city of Whiterun; one of the duties of this temple is to tend the Gildergreen which is considered sacred to Kynareth's followers.[7]

Forsworn Reachmen, otherwise known to be Daedra worshipers, appeared to worship an unknown deity at a shrine of Kynareth during the Fourth Era.[8] In the Second Era, a Reachfolk group - Dreadhorn Clan was known to use shamanistic Kyne-magic.[UOL 1]

The Khajiiti interpretation of Kynareth is the Goddess of the Winds, Khenarthi. Khenarthi acts as a psychopomp for faithful Khajiit.

Kynareth is often associated with Zenithar. Craftsmen use natural materials to create, and so one cannot revere Zenithar without acknowledging the power of Kynareth.[9] Canah feathers can be offered to Kynareth at her shrines; in return, the one making the offering will temporarily transform into a Canah.[10]

The island of Betony is considered holy land of Kynareth. This was a factor for Daggerfall's involvement in the War of Betony. It was also the reason why the conflict escalated to the Battle of Cryngaine Field which ended the war.[11] Kynareth is the patron deity of Alcaire, Daggerfall and the Wrothgarian Mountains.[12]

The Redguard interpretation of Tava, is the goddess of air, weather and sun, who has since been assimilated into the mythology of Kynareth.[4]

The air spirits Amaro, Pina, and Tallatha, are acknowledged as the Fingers of Kynareth by the Skeffington Coven.[13]

The Kothringi, the indigenous humans of Black Marsh, are known to have worshipped Kynareth, alongside Mara and Dibella as one of the "mothers in the Around-Us".[UOL 2] 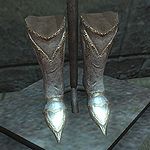 The Boots of the Crusader (also known as the Boots of Kynareth) were created by Kynareth. The wearer will not be attacked by creatures of the forest. Sir Juncan of the original Knights died while searching for the boots. The pilgrim visited the Shrine of Kynareth, and was told the location of the "Grove of Trials" by the high priestess (later to become Sir Avita Vesnia). Kynareth tested the pilgrim by sending the Forest Guardian, a giant bear, to attack them. When the pilgrim didn't fight back, having reverence for nature, Kynareth allowed them entrance to the grotto where the boots were hidden. The boots were needed to retrieve the Mace of the Crusader; with them, the wearer's faith is strengthened and they can cross the void of doubt.[14]

The Lord's Mail (also called the Armor of Morihaus or the Gift of Kynareth) is an artifact given to mortals by Kynareth, one of the Eight Divines. It is an ancient plated adamantium, mithril, or ebony cuirass of unsurpassable quality, considered to be heavy armor. It grants the wearer the power to absorb or regenerate health, resist the effects of spells, and resist or even cure poison. It is said that whenever Kynareth deigns the wearer unworthy, the Lord's Mail will be taken away and hidden for the next chosen one. The Mail was originally owned during the Merethic Era by the bull Morihaus, a demigod and early cultural hero of the Cyro-Nordics who was closely associated with Kynareth and the Lord. The cuirass was rumored to have later been taken from Morihaus by Kynareth herself due to his arrogance. The cuirass is sacred to the Imperial Legion and the Imperial Cult, and is accepted as uniform in the Legion. Indeed, the armor has been known to bear the red dragon sigil of the Third Empire on its breastplate. 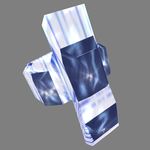 The Ring of the Wind is a legendary treasure of Elsweyr, sacred to Kynareth. It was owned by the nimble acrobat Kisimba Spring-Snow, who was said to always land on her feet, except when she chose to land on the feet of others.[15]