This article is about the city. For the kingdom, see Daggerfall (kingdom).

Daggerfall is the largest city in Glenumbra, located at the southwestern end of the peninsula. It is the capital of the kingdom of Daggerfall. The order Knights of the Dragon have the official duty of protecting the city and royal family of Daggerfall. The last census, in 3E 401, lists the population at over 110,000.[1] 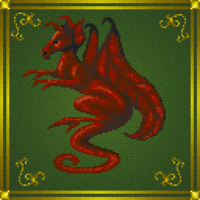 The Crest of Daggerfall

While all of the Iliac Bay region constantly jockeyed for power, two primary rivals for power emerged: Sentinel and Wayrest.[1] At many times throughout history the conflict was merely economic. During times of peace, the nobility of Daggerfall and Wayrest were often known to vacation in Sentinel.[6] The kingdom often cooperated with its neighbors throughout history to fight against Orcs and Orsinium.[7] [8][9] Still, large and bloody wars with its neighbors were common throughout the first and second eras.[10]

Daggerfall was founded a little before 1E 246 by invading Nords from Skyrim, who brought a rough sort of civilization with them during the Skyrim Conquests.[1][11] Numerous legends exist for its name, including that the first chieftain threw a dagger and let the spot where it fell act as the border.[1] Skyrim only maintained control for roughly a century before the War of Succession cost it all its holdings in other modern-day provinces. However, Daggerfall actually thrived under Skyrim's rule and thus had an advantageous position over its neighbors upon independence.[1] The kingdom became a power center for the Direnni clan, but still continued to thrive after they lost power in High Rock.[1] By 1E 609, under the rule of King Thagore, Daggerfall was already the preeminent economic, cultural, and military force in southern High Rock, and it remained so for millennia.[1]

In 1E 948, King Joile of Daggerfall sent a letter to the warrior and leader of the Order of Diagna, Gaiden Shinji for his assistance in his war against the Orcs of Orsinium. At the time, King Golkarr laid a substantial claim over Stormhaven and impeded trade lanes around Wayrest and to the Breton heartland.[12][13] In fact, King Joile's mention of Wayrest in his letter serves as one of the settlement's earliest mentions in recorded history.[12] It was Golkarr's grand proclamation that lauded the Orcish raiders across the Bjoulsae River that forced Joile's hand and led to the following events.[14] Two years after his call to arms, the Kingdom of Daggerfall, in conjunction with the Order of Diagna and the newly-named Kingdom of Sentinel launched an assault on the Orcish capital.[1]

In 2E 541, Daggerfall was threatened by the Reachmen under Durcorach the Black Drake, whose army gathered in front of the city gates. However, the troops were attacked from behind by the army of Heavy Dragoons from Wayrest, who followed them aboard merchant ships. During the battle, Durcorach was slain by Emeric of Cumberland, and his banner was torn. This was a fatal blow to the Reachmen, and soon, the Knights of the Dragon under King Bergamot finished what the Dragoons had begun, scattering the remnants of Durcorach's army. Two weeks later, the kings of Daggerfall, Camlorn, Shornhelm, Wayrest, and Evermore signed the first Daggerfall Covenant.[15] During Ranser's War, King Folbert sent Daggerfall's troops to aid Wayrest.[16]

In 2E 582, the Bloodthorn Cult tried to assassinate King Casimir in Castle Daggerfall as a part of their effort to destabilize Glenumbra. The king's life was saved with the help of the Vestige.[17]

In 3E 267, Daggerfall joined a large coalition of High Rock kingdoms to defeat Haymon Camoran, the Camoran Usurper.[18] Espionage often took the place of open warfare - for example, a Breton assassin who nearly killed Queen Akorithi of Sentinel is widely thought to have been an agent of Daggerfall.[19]

During the Imperial Simulacrum in the late Third Era, the city-state of Daggerfall was ruled by King Tristyctor. It had a rivalry with Camlorn and the Imperial City.[20]

One of the more recent conflicts was the War of Betony: King Lysandus of Daggerfall led his armies to victory in several major battles against Sentinel, purportedly with the help of a Direnni sorceress.[21] Lysandus, wanting to retire from politics, hoaxed his own death during the battle;[22] his son Gothryd took command and killed King Camaron of Sentinel (Akorithi's husband) in single combat, ending the war with victory for Daggerfall.[10] Lysandus was later assassinated, and his troubled spirit began to haunt the city of Daggerfall.[22] This haunting played a major role in the events leading up to the Warp in the West, when Emperor Uriel Septim VII sent an agent to put the ghost to rest.[3]

The spoils of the War of Betony paled in comparison to the influence the Warp in the West brought to Daggerfall: when the dust settled, King Gothryd and his wife Queen Aubk-i controlled all of western High Rock, their only opponents remaining in the Iliac Bay region being Sentinel, Wayrest, and Orsinium. All four kingdoms pledged allegiance to the Empire.[23]

The people of Daggerfall are said to be obsessed with their own past.[12] The culture of the land reflects its history: they believe in a strong military presence and enjoy covert activities, but are traders first and foremost. Perhaps because of these influences, Daggerfall hosts a robust black market, including skooma smuggling, which supplies destinations as far away as Morrowind, and an ambitious Thieves Guild.[24] A sophisticated banking industry is also well-established.[25]