Hegathe (also called Old Hegathe)[1] is one of the eight major cities in the province of Hammerfell,[2] found on the western shore landings of the Abecean Sea.[3] Hegathe was once the capital of Hammerfell, ever since the Ra Gada landed on its shores in 1E 808, that was until it was moved to the north, to the Kingdom of Sentinel. It is known for its austere ramparts that represent the time of antiquity.[1] The name originally referred to the wastelands that was later designated as Hammerfell, deriving from the Aldmeri word for "Deathland".[4] There is a Morwha conservatorium in the city.[5]

Hegathe is found on the west coast of the province, on the southernmost point of the area considered part of the Alik'r.[6] Like the other traditional cities in Hammerfell, it is built atop of old ruins of past civilizations, replaced with high domes and flying dew sails that are well-suited for the harsh environment,[4] as well as an impregnable defense of an antique splendor.[1] One of the city's most iconic landmarks is the Shrine of Tava, a place of veneration for both the Crowns and the Forebears which is highlighted by the Fresco of the Goshawk, a mural depicting the Bird God, Tava, nestled together with his mates, meant to symbolize the union of the two factions.[7] Despite the harsh desert environment, the city has vineyards where they make their signature wine.[8] Hegathe is neighbored by several settlements, including Dragon Grove to the north and Gilane to the east.[2]

The name dates farther back than the city itself, or even the Yokudan incursion that swept across the land. It referred to the vast desert found between Colovia and the Iliac Bay, which in Aldmeris is translated to the Deathland. The Tamrielic variant of the word, often used by the Nedes, was the name used for the region.[4] When the Ra Gada crossed the Sea of Pearls to eventually reach Tamriel, they landed on the harborage that became Hegathe. The landing site was in the possession of beastfolk and they were quickly displaced by the Yokudans. From their newly-founded settlement, the Ra Gada swept across the coastlines to expand their reach.[12] As the remaining refugees had left Herne to populate the province, the Yokudan government, the Na-Totambu became fully-integrated, using Hegathe as its capital.[1]

When the province of Hammerfell was annexed into the Second Empire, two political parties were formed to contribute to Cyrodiil's administration over the land. The Crowns were created from what was left of the Na-Totambu, who retained their high-ranking status in the Empire, using Hegathe as their capital. From there, they are represented by the Phyllocid Dynasty, who maintained their relationship with the Empire throughout its lifetime. The Forebears was the other political party founded in Hammerfell, from the warrior-lords that descended from the Ra Gada and governed tribal districts in the south. For the longest time, these groups were sworn enemies that exceeded far longer than the Empire itself.[1] It took the ascension of High King Ar-Azal, and his union with the Crowns daughter, Arlimahera and the Forebears daughter, Fereshtah, to break the divide between them.[7] The Osseous Crux was discovered on the shores of the Abecean Sea near Hegathe, it was constructed from the bones of some enormous, unknown beast, bound together with twisted fibrous cords. It was later relocated to Sentinel.[3] 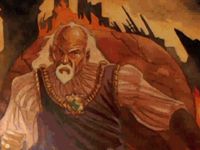 By the Interregnum, the political duality had reverted back to the monarchy of the Na-Totambu and created political unrest, especially when the capital moved from Old Hegathe to the Forebears city of Sentinel. The line of High Kings that ruled from Sentinel continued into the reign of Thassad II as the conquests of Tiber Septim continued to expand and eventually interfere in his domain. The High King passed away in 2E 862 and the capital was retaken by the Forebears, under the command of Baron Volag, ensuing a vicious civil war between the Crowns and Forebears. When the latter enlisted the help of the Third Empire, victory shifted from the Crowns to the Empire and eventually, the Crowns lost their territories, until Stros M'Kai was left. Later that year, both the Crowns and the Empire came together to diplomatically establish the Imperial Province of Hammerfell, however, Sentinel remained as its provincial capital.[1][13]

During the Imperial Simulacrum in the late-Third Era, the city-state of Hegathe was an active settlement. It was ruled by Queen Ghapimti and it had a rivalry with Gilane and Sentinel.[10] In the late-second century, the Great War enveloped the province of Cyrodiil and Hammerfell in total warfare. By 4E 172, the Aldmeri Dominion had moved across Hammerfell's southern coast, leaving Hegathe as one of its last standings until in early-4E 173, when the Forebears from Sentinel arrived and broke the siege over the city. The victory of Hegathe brought the reconciliation of the two parties.[14]