This article is about the city. For the Third Era county, see Satakalaam (county). 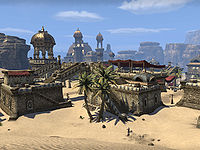 Satakalaam is a city on the western coast of Hammerfell, on the eastern coast of the Iliac Bay at the edge of the Alik'r Desert. The nearby Motalion Necropolis is said to be the largest crypt in the Alik'r, and some of the most reviled people are entombed there.[1][2]

During the Alliance War of 2E 582, the Empire of Cyrodiil sent the Seventh Legion to capture the city as the first step towards reconquering Hammerfell and High Rock. The Legion entered the city through a smuggling tunnel from Bangkorai, taking key hostages and looting the Temple of Satakalaam.[3][4] However, the forces of the Daggerfall Covenant were successful in swiftly liberating the city.[3]

During the period leading up to the Warp in the West in 3E 417, the city was the capital of the County of Satakalaam.[5] Following the Warp, it came to be ruled by Sentinel.[6]