This article is about the city. For the kingdom, see Sentinel (kingdom).

Sentinel is a great city of the Redguards, and the capital of the kingdom of Sentinel. It is located in the northwestern hills of Hammerfell, overlooking the Iliac Bay.[1] Its population is relatively low due to the inhospitable nature of the surrounding Alik'r Desert.[2][3] However, some fertile fields can be found along the coast near the city,[4] and the city is actually a major population center in Hammerfell.[5][6]

The main street of the city of Sentinel is a great market between the docks and front gates.[7] The city is an exotic retreat for the nobility of Daggerfall and Wayrest, who delight in the cooking, craftsmanship, and plays which can be found there.[7] Many great and famous people throughout history have called Sentinel their home, including the renowned poet Weltan and the famous Redguard hero Cyrus.[8][9][10]

Above the sea Sentinel shines,
Her domes agleam in the Iliac dawn.
Her people throng the bazaars, and find
Their way between man's walls of stone.
But even in the towered town,
Sandals tread tracks in Alik'r sand. — On the Immortality of Dust

Before the Redguards arrived from Yokuda, the elves and Manmeri established an outpost at what is now Sentinel in order to protect fisherfolk and seafaring merchants from inland Orcs and other hazards in the desert.[11] Little did they know that the greatest threat would come by sea.

"And the shores were green with the leaves of pomegranate, and fig, and olive, and the men of the Grandee saw this and were hungry, and sought to come ashore, despite the warnings and cries of the port-rabble." — Sentinel, the Jewel of Alik'r

After the Ra Gada first landed in Hegathe, the warrior-sailors of the Grandee Yaghoub sailed north until they rounded Cape Shira, becoming the first of the Ra Gada to discover Iliac Bay. Yaghoub decided to make his home there. As they sailed "toward the Steed at dawning of the seventeenth of Second Seed", a watchman spotted a suitable harborage, and Yaghoub declared they would build a city there, calling it Sentinel after the watchman.[3]

They quickly discovered and established control over the locals' port with little if any opposition. Yaghoub conscripted the locals to serve as masons and servants in the building of his new palace, Samaruik, and the rest of the city.[3] Samaruik, also called Sentinel Palace, remains the oldest and largest architectural achievement in the city, and several additions have been built onto it over the years.[7] After Sentinel was attacked by Abecean pirates, Yaghoub built the Impervious Vault - a fortified storehouse under the city, most notable for housing the Ansei Wards.[4] When the Crowns followed the Forebears into Hammerfell, they considered Sentinel a "worthy seat", and many of the Na-Totambu settled there (but the city has always been considered a Forebear stronghold, though that term wouldn't be in use until the days of the Second Empire).[3][7]

Of course, the people of Sentinel still had their share of setbacks. They had to adapt to life as merchants.[2] Once, Peregrine Direnni drove an entire Ra Gada flotilla back to Sentinel by using her prodigious sorcery to manipulate the waves of the Iliac Bay.[12] Like the rest of the Iliac Bay, they also faced the devastation brought by the Thrassian Plague, the War of Righteousness, and an invasion from Akavir.[2] 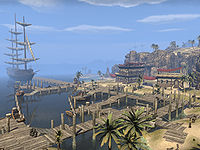 Sentinel and the surrounding area have long been notorious for widespread, underground necromancy.[13] In 2E 582, under the reign of the Forebear King Fahara'jad, Sentinel came under the threat of attack from an undead army. The army was vanquished, though, in what the Forebear king asserted was a divine intervention.[14]

During the Interregnum, control of Hammerfell reverted to the hereditary monarchy of the Na-Totambu. To the chagrin of the Forebears, the new High King boldly moved his throne from the old capital Hegathe to the more prosperous Sentinel. By this time, Sentinel had mastered a third of the trade in the entire Iliac Bay. Upon the death of High King Thassad II in 2E 862, the Forebears retook their city by force. The vengeful Crown Prince A'tor set sail to the city to avenge his father, resulting in one of the bloodiest massacres in Tamrielic history. When Tiber Septim swept in and reestablished Cyrodilic control over the province, it was seen as a humanitarian intervention.[7]

During the Interregnum in the late Third Era, the city-state of Sentinel was an active settlement, being known as the "Guardian of Starfall Bay." It was ruled by King Caacte, and it had a rivalry with Hegathe.[15] Sentinel was neighbored by several settlements, including Chasetown to the south, and Lainlyn to the east.[16]

Despite the defeat during the War of Betony circa 3E 402, the city of Sentinel continued to flourish, and it was renowned at the time as the place to go to earn some quick gold or find a bit of adventure.[17] Hammerfell was controlled from the city's throne.[18] An unsuccessful assassination attempt on the life of Queen Akorithi was widely attributed to jealous Daggerfall royalty, though this was never proven.[19]

Thalmor agents were harassing and possibly murdering refugees in Balfiera and Sentinel around 4E 48; the victims were all of mixed blood or had associations considered by the Aldmeri Dominion to be "unclean".[20] In 4E 42, Altmer dissidents who had fled to Sentinel from the Thalmor in Summerset Isle were attacked by Thalmor operatives in what became known as the Night of Green Fire. Their efforts to fight back against the Thalmor were in vain, and by the time Imperial Legion soldiers arrived, the entire refugee district of the city had been destroyed. The Dominion, not content with killing dissidents at home, came to Hammerfell to finish the job. An Altmer Legate known as Fasendil was one of the soldiers stationed there.[21]

Animosity between the Crowns and Forebears was sometimes so great that the factions have been known to leave each other to their own fates during foreign invasions.[11] But in 4E 173, when the Crown city Hegathe found itself besieged during the Great War by the seemingly unstoppable forces of the Aldmeri Dominion, a Forebear army from Sentinel came to their aid and broke the siege. This led to the reconciliation of the two factions.[22]