This article is about the city. For the barony, see Lainlyn (barony). 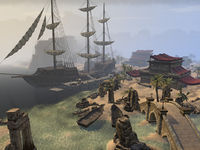 Lainlyn (formerly known as Tava's Blessing)[1] is a small city located on the north-central coast of the Alik'r Desert, in the province of Hammerfell. It is a small and minor port city that is occupied by the Crowns.[1] The shipyards in town are well-known throughout the region and have been used by people such as High King Fahara'jad of Sentinel, to manufacture ships for the royal navy.[2] Lainlyn is the seat of power for the eponymous Barony of Lainlyn, a political entity located in the southern Iliac Bay region, in the forest region east of the Dragontail Mountains. The city was specifically located on the northeast section of the region, on the coastline.[3] 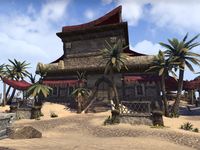 The city is located on the northern coast of Hammerfell, surrounded by rocky mountain range on the coast and the plateau to the south, Sep's Spine. Much of the region outside of the city is uninhabited, except for a series of camps built by merchant caravans and bandits. The only known settlement outside of Lainlyn's vicinity is the town of Aswala Stables, the next town on the road southwest of town. The mine, Coldrock Diggings located southeast of town is used by the Lainlyn shipwrights to supply them with grit-rock, which they use for sanding wooden planks, and holystone, which they used for cleaning the deck.[4] Lainlyn is neighbored by several settlements, including Sentinel to the west and Vulnim Gate to the southeast.[5]

Lainlyn is a walled-off settlement,[6] built on the mainland and a couple large islands, separate by shallow, but steep ravines. The geography mostly consists of wide, sandy hills where the town is mostly built on, large ridged stones that surround the river, and tall palm trees that come in clusters, next to some greenery. The city streets are wide but mostly covered in sand and surrounded by small stone walls with fences. On the northern tip of the city is the lighthouse island, which contains some old ruins.[7] Dispersed throughout the area are large docks where the shipwrights build everything from an Alik'ri caraval, to a large galleon.[8] The head of the shipwright faction is known as the Master Architect, and they typically live in an estate on the southeast part of town.[9] The south end of town is centered around the fountain and the local forge, whereas the north end is surrounded by a large warehouse and the Ansei Shrine built by Jamshald Lainlyn.[10] 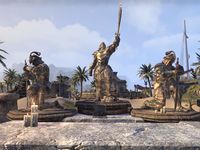 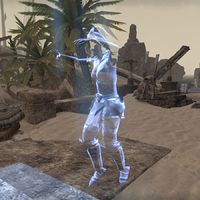 The town of Tava's Blessing has been active since at least the Ra Gada's time, when the Yokudans attempted to establish their foothold in the region, all the while threatened by elven necromancers and their undead horde. Since the Yokudans could not destroy the undead, per their tradition, they created the Ansei Wards, holy weapons designed to protect the consecrated dead and rid them of the evil magic. Three Ansei warriors sacrificed their lives and embedded their spirits into the wards, one of which was Maja,[11] who hailed from Tava's Blessing.[10]

One of Lainlyn's oldest stories is the story of Ghraewaj, where Noctyr-a, the leader of a cult of daedra worshippers, seduced the Baron of Lainlyn and took over Castle Lainlyn, turning it into an orgy-filled den of decadence. Before Noctyr-a convinced the Baron to commit suicide, the Baroness gave her a white robe that transformed her into a large black bird. No longer charmed, the Baron slew the bird and had his cook prepare a large meal with it. At the height of their frenzied debauch, the sisterhood devoured the bird and transformed into harpies.[12]

In 2E 102, the local artist, Jamshald Lainlyn created a monument to honor the Ansei warrior, Maja and commemorate her birthplace, the city of Tava's Blessing.[10] When Prince Fahara'jad was named High King of Hammerfell after the Knahaten Flu in 2E 560,[13] he enlisted the shipwrights of Tava's Blessing led by Master Architect Curly Lainlyn to build vessels for his royal navy at a consistent standard and rate.[8] Since then, the shipyards have built ships for the King and later the Daggerfall Covenant, especially for their war effort in the Alliance War.[2] By that time, the Master Architect was named Sulim.[9] In 2E 582, House Telvanni sent a spy to steal ship designs to reverse engineer their own vessels, but it is unknown if they were completely successful.[14]

In that same year, the Withered Hand led by Alasan ransacked the town and killed many people, including the Master Architect. With his magic, the necromancer planned to focus energy from the dead to turn himself into a lich in the lighthouse. Prince Azah sent an Agent of the Covenant to destroy each of the focuses throughout town, all the while slaying the undead. Once they were destroyed, the Agent confronted Alasan at the lighthouse, where they stabbed him and broke the Ansei Ward. But with the ward's destruction, all the necromantic energy stored in the sword had spread out across town and resurrected the dead as Ra-Netu. His spirit was still present however, and was deemed invulnerable by the spirit of Ansei Maja. But in quick haste, the Agent re-assembled the Ansei Ward at the town forge and Alasan's spirit was imprisoned in the sword.[15]

At some point after 2E 582 but before 2E 864,[16] Tava's Blessing was re-named into Lainlyn, after the eponymous family that lived in town.[1] During the Imperial Simulacrum in the late Third Era, the village of Lainlyn was an active settlement. It was ruled by Lord Glavt and had a rivalry with Chasetown.[17]