Once you reach level 5, you may receive a letter from Prince Lhotun of Sentinel. It reads:

Travel to Sentinel, locate the castle in the center of the city, and enter it. Look for Prince Lhotun in the entrance hall, seated on the right. Speak to the prince and he says:

"Welcome to Sentinel, (player's first name). I guess you must have received my letter. I know some things about Lysandus and why he might be haunting Daggerfall, but before I tell you, you have to promise to do something for me first. Is that all right?"

Accept the quest, and Lhotun will say:

"You will? Thank (random god). You see, I used to to [sic] have an older brother, ten or eleven years older than me, named (prince's name). Whenever I ask what happened to him, I'm told a different story. Some say he got sick and died, some say he was kidnapped by the Underking. I want to know the truth. If you can find some proof of what really happened to him, I'll tell you all I know about King Lysandus."

Ask around town about the missing prince to hear some of the more popular rumors and theories regarding his death. You might also learn some interesting details of his personal life. For one thing, he was more a scholar than a warrior, a trait which used to irritate his father, King Camaron. For another, he was the only prince to never receive a public funeral. Other than these two suggestive facts, you will learn nothing useful about the prince. 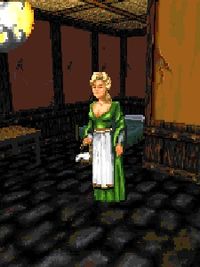 An Agent of the Underking

After several days, you will be approached:

A thin, rail of a woman steps forward and hands you a note. She turns aside all your questions with a gaunt, expressionless face."

Check your inventory for the note. It reads:

Make your way to the tavern. Go to the upper level of the rendezvous point to find your contact, who greets you with,

"(Player's name)? Shh. I would prefer that nobody sees me talking with you. It has come to our attention that the Underking is being wrongly accused of abducting prince (prince's name). Before you judge, check into (dungeon). I'll mark it on your map. Who am I? Just call me a loyal servant. Now move away before anyone gets suspicious. Go on, scram." 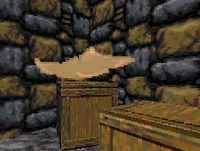 The last words of the Missing Prince

In classic Daggerfall, the dungeon named by the Agent of the Underking will be either Castle Faallem or The Fortress of Fhojum. In Daggerfall Unity, it will be randomly selected from any Ruined Castle in Sentinel. The rest is a standard dungeon crawl. When you find a piece of parchment on the ground in the dungeon, pick it up to receive the "Death Certificate," which reads:

Leave the dungeon and return to Castle Sentinel. Deliver the note to Lhotun and he will reply:

"This what [sic] I most feared. Poor (prince's name). As I promised, here's what I've heard about Lysandus. I don't know how much of this is secret, but I trust you. Lysandus was in love with his court sorceress, a noblewoman named Medora Direnni, and during the war with us, his queen found out. They say that while her husband was gone, Queen Mynisera banished Medora from the court. My sister Aubk-i is queen now, part of the treaty to insure [sic] peace, but Mynisera still resides at Castle Daggerfall as the dowager Queen mother.

I don't know where Medora went, but I know she has an enormous castle somewhere on the Isle of Balfiera. But I also heard there is some kind of curse on her, and she can never leave. I don't know if that helps you, but that's all I know. Again, thank you for (prince's name)'s letter. Just knowing what happened will ease my heart somewhat. Please take this (magic item) as a token of my appreciation."

Alternatively, you can deliver the note to Queen Akorithi, Prince Greklith, or Lord Vhosek. However, giving the note to anyone but Lhotun results in quest failure, and will cause your Reputation in Sentinel to plummet. Present the note to one of these three and be met with:

"What is the meaning of this? Blackmail? Why you contemptible scoundrel. You ought to be thrashed for attempting to pass this cheap counterfeit. Poor Prince (prince's name) died of a fever many, many years ago. Why can't you let him rest in peace?"

If you give the death certificate to Lhotun, the quest will count as a success and you will gain reputation according to the table below.

If you give the death certificate to either Akorithi, Greklith, or Lord Vhosek, the quest will count as a failure and you will lose reputation according to the table below.

In addition, your Regional Reputation in Sentinel will also decrease by 20 points.

If you ask an NPC about the missing prince, you may hear:

If you ask an NPC about the dungeon you are sent to: