Mynisera, the former Queen of Daggerfall 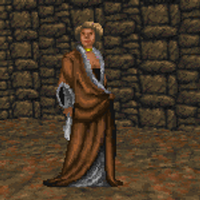 The Dowager Queen in her chambers

The Dowager Queen Mynisera is a Breton noble and former Queen of Daggerfall. She is the widow of the late King Lysandus, and mother of King Gothryd. Mynisera can be found in her private chambers in Castle Daggerfall.

As was Lysandus, Mynisera is friends with Emperor Uriel Septim VII. During the War of Betony, the emperor sent her a sensitive letter. This letter did not make it into Mynisera's hands. The courier failed to reach Daggerfall until the war had ended, and the letter was erroneously delivered to newly-crowned Queen Aubk-i. Before it could be recovered, the letter was stolen by the Thieves Guild and sold to Gortwog, the Orc Warlord.

Mynisera secretly pays for the upkeep and garrisoning of Castle Necromoghan. The dowager queen has often been spotted sneaking away to this hideout with mysterious parcels, and returning empty-handed.

This article, which is part of the Daggerfall Redesign Project, is a stub. You can help by expanding it.
Retrieved from "https://en.uesp.net/w/index.php?title=Daggerfall:Mynisera&oldid=2359973"
Category:
Hidden categories: