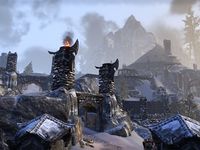 A map of High Rock

Farrun (or Fharun) is a northern port city on the north shore of High Rock,[1] and one of eight kingdoms in the province.[2] It is known for its icy winters.[3] The kingdom of Farrun has existed since the First Era, one notable citizen of Farrun in the First Era was Lord Storig, who commanded the vanguard of the Imperial army at the Battle of Bodrum in 1E 2920 during the Four-Score War.[4] By the Second Era it was an Orcish stronghold by the name of Fharun, named after the Fharun Clan. The stronghold was infamous for its Breton-designed prison complex, which was notorious even among the Orcs.[5]

Fharun was also home to archivists of Malacath, who protected a sacred scroll that supposedly contained the words of Malacath himself. During the Interregnum, the clan was led by Chief Bazrag gro-Fharun, a Malacath worshipper. Bazrag refused to bend the knee to the Trinimac-worshipping King Kurog, despite being an old friend of the king. Because of this, Fharun did not join the Daggerfall Covenant in 2E 567 and didn't take part in the Alliance War of 2E 582.[6]

Following the end of the Planemeld, Kurog began a concerted effort to rebuild his seat of Orsinium and unite the whole of Wrothgar under his rule. Bazrag and several other clan chiefs resisted, and Kurog enlisted the aid of the Vosh Rakh to assassinate the chiefs. Fharun was seized by the Vosh Rakh, who threw their captives into the prison and released the prisoners to kill them. Bazrag was rescued from such a fate by the Vestige, and returned to Orsinium to foil Kurog's assassination attempt. Following the death of Kurog, the surviving chiefs appointed Bazrag as king, uniting Wrothgar and ending the worship of Trinimac. The Vosh Rakh fled from Fharun Stronghold, although it is unknown if the settlement was reclaimed by the remaining clan members.[6]

Kurog's Orsinium eventually fell, and at some point Fharun became the Breton city-state of Farrun, where an unnamed king was known to have fought a war against Solitude and its allies some time late in the Third Era.[7] During the Imperial Simulacrum in the late Third Era, the city-state of Farrun was an active settlement. It was ruled by King Tristyrick, and it had a rivalry with Jehanna.[3] Farrun was neighbored by several settlements, including Cloud Spring to the southeast, Dunlain Falls to the south, and Jehanna to the east.[8]