Purification is an ancient rite of the Dark Brotherhood, carried out by the Black Hand in order to cleanse the Brotherhood of mistrust and treachery. It is a drastic measure and has only rarely been performed. Purification involves the purposeful assassination of Dark Brothers and Sisters, in breach of the Five Tenets of the Brotherhood. The ritual can wipe out an entire sanctuary, with the souls of those killed offered to Sithis as a symbol of fealty, while hopefully eliminating traitors in the process.[1]

Only three Purifications have been carried out in total.[1] 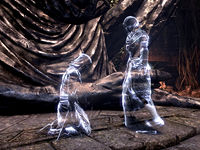 A Hist vision of Lyra Viria after the first Purification

The first Purification was decreed by the Black Hand in the mid-Second Era to root out the betrayal and corruption which had festered in the ranks of the sanctuary at Xith-Izkul, an ancient Argonian xanmeer located in the Blackwood borderlands, just over the border of Black Marsh. The exact nature or source of the betrayal is unknown.[2] Lyra Viria, one of the sanctuary's assassins, was ordered to carry out the ritual. She eliminated every other member of the sanctuary, except for an Argonian named Green-Venom-Tongue who had been working deep within the Marsh that season. Viria was appointed as the Silencer of Speaker Arawen for carrying out the Purification, but the elimination of her family had impacted her deeply and she became disillusioned with the Brotherhood.[3]

On her very next contract, Viria was introduced to Primate Artorius Ponticus of Kvatch, who recruited her to the Order of the Hour. She became the "Black Dragon" and began using her considerable skills as an assassin to wipe out the Brotherhood. These events came to light circa 2E 582 when Viria killed several members of the Gold Coast sanctuary. Using the fumes from burning Hist resin, Green-Venom-Tongue returned to the ruins of Xith-Izkul and observed visions of Viria's betrayal. She was later assassinated by the Brotherhood, and her soul was dragged to the Void by the Wrath of Sithis.[3]

Purification of the Crimson Scars[edit] 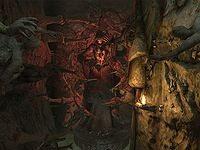 The Shrine of Sithis in Deepscorn Hollow

The second Purification[4] was carried out in Rain's Hand 3E 421 to eliminate the Crimson Scars, a vampiric subfaction of the Dark Brotherhood that plotted to infect every member of the Brotherhood with vampirism. The Black Hand was alerted to the threat by an assassin named Silarian, who betrayed the Scars. The majority of the Scars were slain in their sleep, their hearts pierced with silver daggers.[5] This Purification resulted in the death of the entire sanctuary.[4] Only two escaped: Greywyn Blenwyth, the founder of the Scars; and a Breton named Rowley Eardwulf. Working with Rowley, Greywyn transformed Deepscorn Hollow into a hidden lair, but he failed to make contact with any other surviving Scars. After several months of prayer, Sithis spoke to Greywyn and demanded he cure himself of vampirism as punishment for his deeds.[5] Greywyn worked for many years on a cure, but was ultimately tracked down and killed by the Brotherhood[4] in 3E 433.[6] 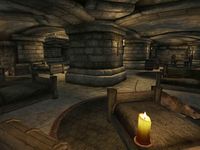 The third Purification was ordered in 3E 433 by Lucien Lachance, a Speaker of the Black Hand responsible for the Brotherhood sanctuary in Cheydinhal.[7] For some time, rumors within the Brotherhood had suggested there was a traitor among their ranks, with several assassins ending up dead.[8] The traitor was a Speaker named Mathieu Bellamont, who sought vengeance for the Brotherhood's killing of his mother many years prior.[9] Unaware of this, Lachance ordered the Purification of the entire Cheydinhal Sanctuary, to be carried out by a skilled assassin who was new to the sanctuary. The assassin was appointed as Lachance's Silencer for performing the ritual, but Bellamont's betrayal continued and ultimately resulted in the elimination of half the Black Hand, including Lachance himself. Cheydinhal Sanctuary was later re-established by Speaker Arquen after the traitor was revealed.[7]