This article is about the Bosmeri Wild Hunt. For Hircine's Wild Hunt, see Great Hunt. 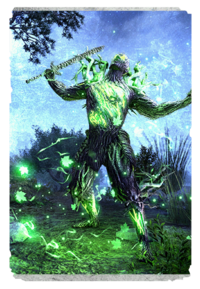 The Wild Hunt is a magical trait innate to all Bosmer. It is brought on by a collective ritual performed by many Bosmer, causing them to shapeshift into a horde of feral, supernatural beasts. These monsters stampede, changing their form constantly, slaying and devouring all in their path and eventually, when left with no surviving targets, turn upon themselves in a "cannibalistic orgy".[1] This transformation is seen by the Bosmer as a return to the chaos of the Dawn Era they call the Ooze, when they were unable to hold onto one shape for more than a moment. After they made the Green Pact with Y'ffre, he taught the Bosmer how to escape that chaos and retain their form, but also how to return to it by instigating the Wild Hunt.[2]

These shapeshifters are stripped of their flesh from their bone instantaneously, and turn into creatures that "defy all attempts to identify them".[3] Some may not even turn into creatues at all, and instead change into "great writhing tongues, unfettered by lips or teeth", or can take on a gaseous form which makes them impossible to contain without the aid of magic.[4] There's even some suggestion they can take on the form of water,[5] or waves of blood. The forms they take are not static, however, as they may appear like a serpent one moment, and shift into another creature the next moment.[3] When Bosmer invoke the Wild Hunt, it causes a change in wild animals as well. Beasts typically transform into beings that are part plant and part animal.[6]

The purpose of the Wild Hunt varies with each separate Hunt, from an act of vengeance to a tool of war. In either case, the Bosmer are not proud of their ability and are unwilling to discuss the Hunt at great length. One of the rare accounts on the nature of the Wild Hunt states that "every monster in the world that has ever been comes from a previous Hunt". As such, the Bosmer are reluctant to use the Hunt, except as an act of desperation. The monsters that do get created by a Wild Hunt, all former Bosmer, are said to be ferocious and long-lived. Notable examples included Willy the Bitten and King Dead Wolf-Deer, who were created by the end of the fourth century of the First Era and lived at least until the beginning of the Third Era. They went on to plague Silvenar Grove and the Lynpar March respectively. The change is said to be irreversible.[5]

Hircine is capable of creating creatures that mimic those that are created from Wild Hunts. He meddled with the nature of wolves, making them susceptible to shapeshifting. This modification is the origin for both Werewolves, and the Wild Hunt Wolf, who as their name suggests, are wolves that have become unraveled because they have forgotten their Y'ffre-taught form,[7] much like creatures that get caught up in the Bosmer’s Wild Hunt ritual.[8] Hircine's Bloodroot Forge is also capable of creating creatures much like those of the Wild Hunt.[9]

There have been three documented cases of the Wild Hunt:

In the Khajiit's Moonlit Path, the Vestige accompanied the future Mane and encountered a vision of a possible reality of a Wild Hunt occurring in circa 2E 582, due to the fall of the First Aldmeri Dominion. It showed that after the fall of Mane Akkhuz-ri and his speaker Gharesh-ri, the Khajiit fell away from the Dominion, while on Summerset, the Veiled Heritance led a successful revolt against Queen Ayrenn, leaving Valenwood vulnerable. This led to the Daggerfall Covenant and the Ebonheart Pact launching their assault on Valenwood. After losing hope, the Green Lady Gwaering and the Silvenar Indaenir recited the words and caused the Wild Hunt to transform their people into feral creatures, leading the two to become hunted by their own people and the province being engulfed in chaos.[12]