The UESPWiki – Your source for The Elder Scrolls since 1995
< Lore: Places
Jump to: navigation, search 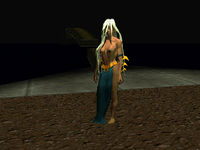 A Nocturnal, her spirit withdrawn into the Dreamsleeve

The Dreamsleeve (also known as the dreaming-sleeve) is an obscure and rarely mentioned concept or construct. Two widely disparate functions have been ascribed to it, though they are not necessarily mutually exclusive.

Dreamsleeve "transmission" has been mentioned as a method of communication which has been used to contact those across vast distances.[1] The Dreamsleeve has been described as a conduit for sending special transmissions, used by magicians and Imperial clerks. To reach it, one must have at least part of their brain constantly meditating, as one aspect of the conduit is its ability to carry images of concepts not yet "real".[UOL 1] It is utilized as a rapid means of magical communication, related to telepathy and "Memospores".[UOL 2][UOL 3][UOL 4]

During the Imperial Simulacrum, Daedric Prince Mehrunes Dagon's forces invaded Nocturnal's realm of Shade Perilous on their way to taking the Battlespire.[2] As a result, Nocturnal Lieutenant Jaciel Morgen fell into a deep despair and drove her own spirit into the Dreamsleeve.[3] This left the Daedra physically present but mostly unresponsive, as if in a deep sleep. Only the self-sacrifice of her servant Deyanira Katrece was enough to awaken her.[2]

According to the teachings of Mankar Camoran, "mortals leave the dreaming-sleeve of birth the same, unmantled save for the symbiosis with our mothers". It is through the abandonment of the mother that mortals therefore enter the domain of Lord Dagon, the Prince of Destruction.[4]