This article documents the many modes of transportation found around the various regions of Tamriel. 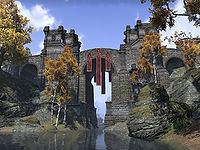 In the late First Era, Empress Hestra improved the roads of her realm, and the Reman Emperors continued her policies. The last period of First Era road-building was in the reign of the last strong Akaviri Potentate, Sidri-Ashak.[1] The Second Empire built an extensive network of roads all across Tamriel (except for Morrowind). During the Interregnum, most of the roads, especially in Valenwood and Black Marsh, became overgrown and abandoned, however, they were reconstructed by the Third Empire. Travel through those roads is the most common way of land transportation.[2]

The first of those roads were built in Cyrodiil, most of them stemming from the Imperial City, the very heart of Tamriel, and then branching into the neighboring regions.[3] These roads connect all of mainland Tamriel. Many choose to travel by foot, due to poverty, their own preference or need. However, most goods and people travel in carriages, caravans, or mounted on various creatures, varying by region.[2][4]

Besides its own road system, the island of Vvardenfell had foyadas, or fire-rivers in the native Ashlander language, which are deep, ash-dark ravines which run down from the Red Mountain volcano on Vvardenfell. The lava from Red Mountain is very fluid and runs almost like water. During an eruption, lava pours down the mountainside and leaves the area bare of all vegetation. Once a Foyada is created, the chance of a new one lessens, as the lava will normally run down the existing one. They are a good alternative to roads when heading towards the rugged mountain, as they have good footing, are clear of brush, and run for long distances:

In Cyrodiil, Elsweyr, Hammerfell, High Rock, Morrowind, Skyrim, and the Summerset Isles, roads are relatively safe to travel, and there are carriage and caravan services for traveling between settlements. Carriage travel services are usually located outside of main cities, which usually take the travelers to a neighboring city or town for a small fee.[7][8][9][10] Caravans, however, use to have been used for longer journeys around Tamriel, trading with goods between different regions or carrying wealthier or more important travelers than those who use mounts or travel by foot.[11][12]

Both carriages and caravans are usually drawn by horses in most of Tamriel; Cyrodiil, the Summerset Isles and Skyrim, and most of Elsweyr, Hammerfell, and High Rock. However, in certain regions, the beasts of burden differ from those of Cyrodiil. In the deserts of Hammerfell, the Redguards use camels, in Morrowind, the Dunmer use guars, and in Wrothgar, the mountain Orcs use echateres.[13][14][15][16][17][18][19] A special case is that of Black Marsh, where the terrain is too harsh for beasts and the carriages and caravans are drawn by native Argonians.[4]

In Cyrodiil, the Summerset Isles and Skyrim; and most of Elsweyr, Hammerfell, and High Rock the most common mount, both for military and civil uses, is the horse. There are many breeds of horse by region, each with certain characteristics which make them more capable for certain tasks: from beasts of burden, to war or travel mounts.[13][20][21][22]

In the desert and savannah wastelands of Anequina, senche-lions are the most common mounts.[23][24] Baandari traders specially favors senche-panthers.[25] On the other hand, in the forests of Tenmar and in the steamy jungles of Pellitine, senche-leopards are the favorite election of locals.[26][27]

In the desert wastelands of Hammerfell, the most common mount used by the Redguards is the camel.[28] White camels are said to be sacred to Zeht, the Redguard god of food and farming. The devout folk of Hammerfell bow when one rides past.[29] The camels are used as military mounts, as civil mounts and as livestock, from which locals obtain its meat, hide, and milk.[30][31]

Dunmer and Argonians from Morrowind and Black Marsh use guars as their most common mounts, using them for every task from military to civil ones.[32][33][34][35] Argonians have a special link with these creatures and many consider them part of their families. Even in Morrowind, Argonians slaves and freedmen always have been taking care of guars. These reptiles are also used as livestock, from which locals obtain their meat, bones, and hide.[16][17] Occasionally, kagoutis are domesticated and substitute guars due to its larger size and strength, however, they are very uncommon.[36]

Iron Orcs, in the Dragontail Mountains, use welwas as their military mounts.[37] Mountain Orcs, in Wrothgar, use echateres as their civil mounts and domesticated bears as their war mounts.[19][38] Echateres are also used as livestock, from which Orcs obtain its meat, bones, hide, and milk.[39] Bears have often been used as war mounts by Nords.

Wolves have been used as war mounts occasionally by the Imperials of the Colovian Highlands, the Nords of Hjaalmarch, the Redguards of central Hammerfell, and the Reachmen.[40][41][42][43]

Reachmen and Nords of Haafingar have domesticated great elk as war mounts. But their use is and has been very limited.[44]

Sabre cats native to Skyrim were also trained by the Nords of Falkreath. However, their numbers are low because they are very difficult to tame.[45] Bears are also a popular mount along the high passes between Bruma and Falkreath.[46]

The Redguards of the secretive Pyre Watch have domesticated and bred jackals for use as mounts.[47]

Vvardenfell House Dunmer used silt striders, huge insectoid beasts similar to fleas, for in-land routes. Travelers could hire the services of a local operator, who directly manipulated the nervous system of the creature, who could travel great distances in a fairly short amount of time.[48] In Vvardenfell, many prefer to travel from one end of the island to the other by city-hopping.[49][50][51][52][53] After the Red Year, silt striders almost went extinct, leaving only a few in Solstheim and in the mainland, but without their previous importance in travels within Morrowind.[54] Silt Hoppers, a smaller breed of silt strider, used to be used by Ashlanders as a beast of burden. Nix-oxen were first used as war mounts by the Erabenimsun Tribe, extending their use to other Vvardenfell Ashlanders.[55][56]

In the desert wastelands of Hammerfell and Anequina, where roads are less common, nomadic groups and caravans gather at oases or settlements by way of local guides to travel across the dunes.[57][58][59][60] In the desert, getting lost is one and the same with dying, especially for outsiders.[61]

Senche-lions are the most common mount in the deserts of Anequina.[23][24] On the other hand, the camel is the only animal capable of surviving in the deserts of Hammerfell, where the Redguards use them as a mount and as livestock.[28][30][31]

In the rainforests and bogs of Black Marsh and Valenwood travel by carriage or caravan is often not a viable option, even during the times when roads were restored, as the wilds rapidly take control of the roads. Roads here are typically overgrown, winding, and beset with hostile men and beasts. Due to this, these two regions have developed their own ways for traveling.[2][4]

By far the most interesting means of transportation in the Black Marsh is by "riding the roots". There is an underground expressway of sorts formed within the roots of the Hist trees, and strange parasitic lifeforms will transport passengers over great distances, while they are slowly digested (it takes months to finish the digestion).[4][62] Guar mounts are also used, especially by locals, due to their capability of riding through marshlands.[35] However, Argonians usually prefer to travel by foot or by draft through the almost infinite inner waterways of the region, instead of marching over dry soil and overgrown roads.[4][63]

The thick forests of Valenwood are both the problem and the solution to land transportation in the region. The Green Pact prohibits the Bosmer from harming any plant life, but Y'ffre also gave them the power to magically modify their woods. The roads and cities of the Bosmer are shaped from the very trees. Their intertwined branches make bridges, walls, houses, temples, and palaces. The forest architecture is not only applied to the magnificent graht-oak, which are the center of their main cities, but to the entire Valenwood.[64][65][66] However, sometimes the bridges, stairs and roads made from these branches are too risky to climb and walk for outsiders. Only the native Bosmer and the Imga feel comfortable in the high tops of the trees of Valenwood. Despite of it, falls are common, especially among drunks.[2][67] Due to the forest architecture and the Green Pact, the locals do not use mounts in their travels, and the Bosmer usually travel by foot (and hand). A certain unique form of traveling in Valenwood was through a Graht-oak, which were massive ambulatory trees. Falinesti was one such Graht-oak, which migrated all across the region following a stationary pattern.[2] However, the walking city rooted at the end of the Third Era.[68] Another unique example of traveling in Valenwood takes place beneath the region of Greenshade, where there exists extensive underground tunnels which allows travel across the region without being noticed by the local authorities.[62]