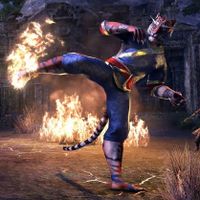 The art of Claw-Dances (known as the Rain-of-Sand fighting styles by the other races of Tamriel)[1][2] refers to the Khajiiti martial arts, which play a major part in the race's history and philosophy. They are considered synonymous with the unarmored form of defense.[1] There are many different disciplines that can generally be taught in the Temple of Two-Moons Dance,[3] but they are known to be studied in their own monasteries, commonly known throughout the province of Elsweyr as the adeptoriums.[4]

While most see Claw-Dances as a form of combat, they are meant to be lyrical meditation, much different than the other races' forms of meditation, which are quiet and lack motion. The claw-dances draw upon the nervous energy that emanates from the monks, which finds expression in raw physicality. The predatorial instinct of the Khajiit and the natural range of motion of their claws give rise to this distinct form of martial art that incorporates claw-strikes and wide leaps.[5]

The claw-dances originated from the late-Merethic Era when the Temple of Two-Moons Dance in Rawl'kha was razed and the hunt-lords seized the opportunity to attain total power across the sixteen kingdoms. The hunt-lord, Takanzin the Striped Death had privately hired outlaws to burn down the temple, causing the clergymen and monks to fight back with a small army. But they were ultimately defeated and Takanzin's armies quickly exiled them from the Kingdom of Dune. The hunt-lords ruled over the kingdoms while the monks went into seclusion to achieve self-perfection. In that time, they developed the claw-dances, which started as meditation, into a dance-like fighting-style. After centuries of isolation, they returned in the waning years of the hunter-aristocracy and taught the people how to fight back. When war broke out between Helkarn and Meirvale, imposing unbearable hardships on the people, a series of peasant uprisings exploded across the kingdoms, from Bruk'ra to Verkarth, eventually ending the years of oppression. The people never forgot about the power they found they could wield, and the claw-dances have been passed on from generation to generation ever since.[5]

The claw-dances became known as the Rain-of-Sand by the other races of Tamriel in the wake of the Third Empire. However, it took several years for them to be accepted by Imperial culture, as the rigid disciplines and mystical philosophies were considered alien to them. Despite this, other cultures embraced them. The races of the Empire soon started to study the ancient arts. The Dissident Priests took inspiration from the Khajiiti fighting styles and incorporated them into their three societal forms, the Golden Reed, the Marshmerrow, and the Salt Rice. The Mages Guild and other similar factions also utilized the Rain-of-Sand as a form of self-defense.[1] 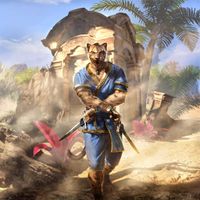 The Desert Wind (known as the Zhan Khaj in Ta'agra) is a martial arts fighting style that is practiced by the order of monks at the Desert Wind Adeptorium, found in the outskirts of the city of Orcrest. The Order of the Desert Wind are archivists who preserve their ancient techniques in many scrolls, which are kept by the Grand Adept.[6] While very little is known about the discipline itself, it uses dual-sword techniques with balanced blades.[7] 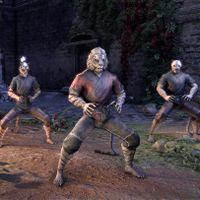 Goutfang
"Do not mistake a righted wrong for an undone wrong."
—Mantra of Jun-ri, Master of the Goutfang.

Goutfang (known as Vrin-Thak in Ta'agra)[9] is an arrhythmic style that is known for utilizing the flow of energy within its user.[9] It is a balanced and fast-moving martial art. It has a versatility that requires coordination and strength,[10] incorporating aspects of other fighting styles, such as grappling,[11] and even sword-wielding. It takes many hours to learn the basic katas before a trainee can wield a blade, and there is no fixed sequence of steps that can turn a novice into an adept or even a master. Training is based on one's personal path to mastery.[12] Those that have mastered the flow of energy via the Goutfang can augment their martial prowess by igniting their kicks and punches.[13] 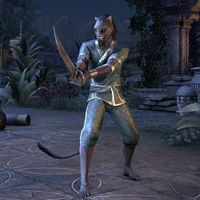 Rawlith Khaj (meaning Desert Rain (lit. Rain of Sand) in Ta'agra)[15] is a form of sword-style martial arts that is practiced by the eponymous order of monks.[15] While it is mainly used with a sword, there are elements of kicking that require rapid agility.[16] There are many variations of the Rawlith Khaj based on different elements (Rain, Sand, Storm, Sun, the Two-Moons Dance, and Wind).[UOL 1] It is also another name for Claw-Dances, used by the other races of Tamriel.[1]

One of its most well-known practitioners is the warrior from Khenarthia, Pilazjo, who trained on the island since his youth until he was traded away to Ne Quin-al as a sign of friendship between two kingdoms. He left a vast collection of blunt training swords in his home adeptorium as a reminder for the hadaliit he left behind. They have since become cherished heirlooms that have since been locked away in several adeptoriums throughout Elsweyr.[17]

"Soft as a whisper, quick as a shout"
"Shadows consume curiosity, time, and interest"
"distance is greater than any weapon."
"command the space to move through it unseen."
"the claw that passes a whisper is the mark of the master"
—The Five Fingers of the Whispering Claw 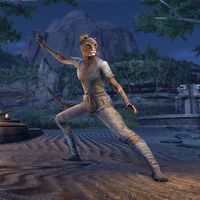 The Whispering Claw (known as Ziz Kurah in Ta'agra)[18] also known as the Whispering Fang[16] is a fast-moving and silent fighting style that is meant for taking another life. As such, the Whispering Claw is ideal for assassins. Masters of the claw-dance are known for their quick reflexes and flight-like acrobatics.[8] By the Fourth Era, some practitioners were known to be monks.[19] The style is considered an antithesis of the Goutfang.[20]

The Ziz Kurah adept, Ujirra, was the last surviving member of her adeptorium after it was attacked by the Dro-m'Athra. She used an artifact known as the Chime of the Endless to keep her safe throughout the night. The hymn that she composed is currently lost to time, but the chime was recovered and placed in the utmost protection at the Bards College in Skyrim.[21] Whispering Claw practitioners are supposedly talented on the washboard because of their mastery in claw strikes.[22]