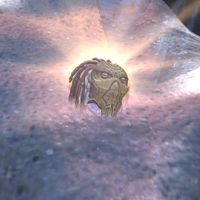 The Mask of Alkosh is a holy relic of the Dragon-Cat Alkosh, his light willing it into existence to help mend the tapestry of time,[1] and is worn by the champions of the Pride of Alkosh. It was first worn by the Ja'darri the Endless, the first champion of Alkosh and the founder of the Pride of Alkosh.[2] A Dragon must awaken the dormant power within the mask before it can be used.[3][4] When the mask is empowered, it imbues its wielder, known as a Mask-Bearer, with extraordinary power.[5]

Some may be inclined to compare the Mask of Alkosh to the Amulet of Kings due to the nature of the relic and the power it bestows upon its Mask-Bearer when empowered by a Dragon. While they are similar, and both relics of the Dragon gods of two different cultures, there is no apparent connection between the two.[4] The mask's physical appearance is comparable to a Dragon Priest Mask, and when the mask is empowered, the user is enveloped in an aura identical in appearance to the Dragon Aspect Dragon Shout.[6]

The Mask of Alkosh was first used by the Khajiiti hero Ja'darri in ancient times to seal away a powerful Dragon named Laatvulon. She was the first to be granted the mask. She attempted to petition the Dragon Nahfahlaar to empower the Mask of Alkosh so that she could defeat Laatvulon, but he refused. Not all was lost, as Nahfahlaar did give Ja'darri one of his horns to aid in the battle against Laatvulon.[3] The dragonhorn was effective, but without Nahfahlaar's aid in empowering the mask, The best Ja'darri and the Dragonguard of the time could do was seal Laatvulon away, a deed that cost Ja'darri her life.

The Mask of Alkosh was stowed in the Halls of the Highmane following Ja'darri's death. Those of the Pride of Alkosh found worthy of bearing the mask were to pass several trials, ending in the retrieval of the mask. In 2E 582, a champion of the Dragonguard passed these trials and obtained the Mask of Alkosh. The mask was used to defeat Laatvulon, this time with the help of Nahfahlaar, who empowered the mask and ensured Laatvulon's death.