The UESPWiki – Your source for The Elder Scrolls since 1995
< Lore: Magic / Artifacts: S
Jump to: navigation, search 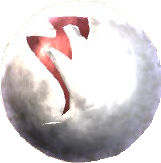 Sigils are signets, seals, or stamps, etched in the shape of a single letter of the 26-letter Daedric alphabet by skilled artisans.[1]:41 Such glyphs are commonly used by the Daedra of Oblivion, and are also utilized by mortals when harnessing Daedric magic.

The Daedra of Oblivion have two main uses for Sigils: as battle signs in hostile territory, and as badges of recognition. Daedric invaders suspend magical Sigils in the air to create Wardings of Entry, which serve as both guide posts for Daedric troops and magical traps for intruders who attempt to pass. Passing through such Sigil Wards requires the individual to be wearing an amulet with the correct Sigil of Entry.[1]:42[2] A Sigil Ward was used by the armies of Mehrunes Dagon in 3E 398 to block the Weir Gate during their invasion of the Battlespire, cutting off access to Tamriel.[3] Sigils are also used by Daedric troops as Badges of Recognition, similar to campaign ribbons among military personnel. These types of Sigil amulets can convey military authority to the wearer when addressing lesser Daedra.[1]:42[2]

Sigils may be used to achieve magical etherealness (a form of Thaumaturgy), although such effects are temporary and consume the Sigil in the process.[2] They have various other magical applications, such as for use in summoning Daedra to Tamriel. For example, a single Daedric rune can be carved into small stones to create Summoning Sigils, used by mortals to summon Daedra; however, the destruction of such Sigils has been known to weaken Daedric artifacts when done in close proximity.[4][5] Sigils can be used in arena combat to magically strengthen or even resurrect the combatants.[6] Sigils are sometimes used as a form of currency, brought back to Tamriel from strange places reached via mysterious portal magic.[7]

Sigils are also involved in the process of creating extra-dimensional objects known as Sigil Stones; the arcane inscription of a Daedric Sigil is what transforms a quasi-crystalline morpholith into a Sigil Stone. This inscription must be carried out by a Daedra Lord.[8]

Sigil Geodes are a type of crystalline stone created by Vastarie from black soul gems. Unlike black soul gems, they cannot be used for enchanting, but instead are used to trap and suspend a soul or Daedric vestige for consultation and eventual release.[9][10]