A Weather Witch, or Karstangz-Bcharn (sometimes Karstanghz-Beharn) in Dwemeris, is a machine capable of weather manipulation. They were created by the Dwemer at the height of their civilization.[1][2]

The Weather Witch in Bamz-Amschend

Circa 3E 427, the goddess Almalexia inadvertently opened a passage to the ruins of Bamz-Amschend when she summoned Fabricants from the Clockwork City to attack Mournhold. Driven to madness by the decline of her divine power, Almalexia subsequently tasked the Nerevarine with descending into the ruins and activating the Karstangz-Bcharn as a show of strength in the face of those who proclaimed the end of the Tribunal. The Nerevarine used the machine to summon ash storms over Mournhold, a weather event which was alien to the region and damaging to the native flora.[4] Almalexia used some of her remaining power to prevent the Karstangz-Bcharn from being further tampered with, ensuring that her city was choked with ash storms until her death at the hands of the Nerevarine a short time later. Following her demise, Azura appeared in Mournhold and rid the city of the ash storms as her "gift to the Dunmer people".[5] 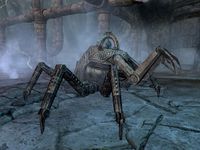 The Sky Orchestrator, an animunculus responsible for maintaining the Vardnknd Weather Witch

Another Weather Witch was built by the Dwemer of Vardnknd, a forgotten ruin located in the Reach. It was said to be the strongest Weather Witch ever created. The Skykiller Gallery in Vardnknd had the ability to control the weather across all of Skyrim. It was powered by four sub-facilities designed by the Dwemer to mimic the four seasons; the natural energies of these facilities were focused into the gallery by conduit control gems.[2]

At some point in the Fourth Era, the Weather Witch of Vardnknd malfunctioned, causing a storm of great intensity to rage across the region. The mage Elberon Blackthorn entered the ruins via Runoff Caverns and managed to disable the machine by deactivating the four sub-facilities.[2] However, circa 4E 201 Elberon entered Vardnknd once again with a band of mercenaries seeking a tome of knowledge which would allow the reader to harness power from weather phenomena. This expedition ran afoul due to the malfunctioning of the Weather Witch; the interior of the ruins was plagued by an unnatural lighting storm, and Elberon lost his life when struck by a bolt of lightning within the ruins.[6]

The Last Dragonborn entered Runoff Caverns in the midst of this failed expedition, following rumors of the Weather Witch. After witnessing the death of Elberon and reading his notes, the Dragonborn followed the same procedure to deactivate the four sub-facilities before entering the Skykiller Gallery and confronting the Sky Orchestrator, a malfunctioning animunculus responsible for maintaining and operating the Weather Witch. With the Orchestrator destroyed, the Weather Witch ceased to function, ending the threat to Skyrim posed by the machine.[6]

The Tempest Observatory at Graven Deep

The Dwemer constructed an underwater station on the seafloor at Graven Deep, a region of the Abecean Sea between High Rock and the Systres. Located on a small uncharted island, this facility extended deep into the ocean and contained a Dwarven machine designed to control the weather. The machine is powered by magicka, funnelled downward through pipes to the seafloor via a Transcender Chamber.[7] The facility allowed for some form of localized weather manipulation, possibly used by the Dwemer to calm the sea.[8]

When Druid King Kasorayn departed High Rock with his people circa 1E 330,[9] they came upon the Uncharted Island and the Dwarven machine within. Although the details of what transpired is unclear, one of the druids, a man named Saer, betrayed the crew and used necromancy to become a lich named Zelvraak the Unbreathing.[10][11] Zelvraak utilized the Dwarven machinery to create storms and pull vessels to their doom in Graven Deep, harvesting their souls and raising an undead army beneath the waves. The area eventually became infamous among sailors, as any ship that entered Graven Deep would never return.[7] Circa 2E 582, a Mages Guild member named Dhulef recruited a group of Undaunted to sail to Graven Deep. Despite getting shipwrecked by the storms, the group managed to enter the underwater observatory and destroy Zelvraak, ending the undead threat and the lich's weather manipulation.[12]