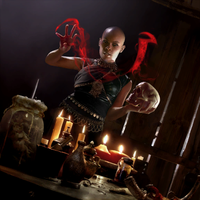 Blood Magic is a dark and ancient form of magic. It is most often used by vampires belonging to powerful bloodlines, who can use it to drain life, reanimate the dead, telekinetically lift others from a distance, summon gargoyles, and paralyze others.[1][2] Vampire Lords can only perform blood magic while levitating and can use their life drain effect to slay mortal men and enhance their blood magical power.[1][3] To a lesser extent, non-vampires can also use blood magic in combat to siphon health from enemies.[4] Argonians are said to be naturally competent at blood magic.[5]

Blood Magic rituals are performed to complete feats of great power. An elven arrow tainted with the blood of a pure-blooded Daughter of Coldharbour becomes a Bloodcursed elven arrow. If fired at the Sun with Auriel's Bow, it is capable of blotting out the Sun for an entire day.[6] Lord Harkon planned to use this method to becloud out the sun for eternity upon discovering the Tyranny of the Sun prophecy, so that he and his vampire kin would free to hunt at whatever time they pleased.[1] According to legend, the Great Sea Serpent terrorizing Serpent's Grotto was formed from the blood of a fish that pleaded for its life to the Bosmer, but was not spared. It came to terrorize the Bosmer until the clan decided to seal it away through the use of blood magic, sacrificing three of the clan's volunteers into blood wells.[7] A Blood Rune could be used to repair the seals on the wells if they ever came undone.[8][9] Though often requiring sacrifices, some blood magic can be performed with the use of animal blood.[10][11]

One of the more common applications of Blood Magic is in the creation of blood-forges and artifacts enhancing blood magic power. The Morkul Clan of Orcs once housed the Hand of Morkul, a terrible device that fused living captives into weapons and armor, as the centerpiece of their bloodforge within their clan holding of Morkuldin.[11][12] They revered Mephala, and were capable of creating gargoyles and living statues through blood magic to serve as guardians.[12][13] The Keptu constructed the Bloodroot Forge over a source of nirncrux before their decline.[14][15] The Dreadhorn Clan of Reachmen later used unholy rites to combine blood, nirncrux, and iron at the Forge to imbue their soldiers with blood-forged power.[16] The Blood of Mauloch is a blood magic spring of red water and mud used by the original Orcish inhabitants of Abamath as war paint, believed by them to imbue them with strength.[17] The bloodspring of Redwater Den and Bloodstone Chalice could improve vampiric blood powers.[6] The Rings of Blood Magic are a set of bone rings that increase vampiric power, and are said to have been given to ancient powerful vampire lords by Molag Bal himself.[18]

The Tsaesci are known to have 'blood seals' which are triggered by specific blood, an example of a blood seal is the one in Sky Haven Temple which requires the blood of a Dragonborn to open.[19]

The Dwemer are also known to have used their own blood to unlock lockboxes, an example of this was the lockbox in Septimus Signus's Outpost in the Sea of Ghosts which required Dwemer blood to open, circa 4E 201 the Last Dragonborn used a mixture of the blood of the Elven races to trick the box into opening.[20]

Blood fountains are present throughout the citadels of the Deadlands, these fountains will restore the health of the whoever uses them.