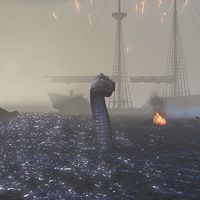 Sea Serpent in the Abecean

Sea Serpents are large sea monsters native to Pyandonea, capable of standing 64 feet above the water.[1] They are tamed and ridden (or occasionally summoned) by the Maormer for use as steeds and warbeasts to support their navy, which is only possible because of the powerful snake magic of their king, Orgnum.[2][3] Maormer often use serpent iconography in their weapons, armor,[4] banners,[5] and most notably their totems.[6] Maormer ships are decorated with sea serpent designs and are capable of passing through the thick kelp around Pyandonea, which serves as a well-camouflaged home for the sea serpents that are Orgnum's guards and occasional mounts.[7] Their hide and teeth are also used by Maormer to craft their gear.[4][8]

Sea serpents were used by the Maormer during the Battle of Seaside Sanctuary against the First Aldmeri Dominion,[9] and they attempted to break the wards binding a century old sea serpent in Greenshade.[10][11] Maps depicted serpents in the waters south of Stros M'Kai,[12] and the skeleton of a serpent was found in the sands of the island circa 2E 864.[13] Snakeskin leviathans are a magickal coupling between Maormer and Sea Serpents, turning the elf subject into a large, powerful, and vicious brute, at the cost of diminishing their behavior to bestial savages.[14] Reef Vipers, another aquatic species native to Pyandonea that are trained by the Maormer,[15] may be related.[16]