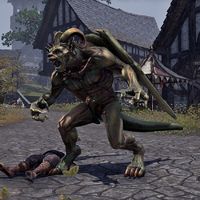 Gargoyles are a race of living statues that have been animated by a wizard or vampire, often found guarding dungeons, castles, and ancient ruins. Some will remain frozen for long periods of time to make their prey think they are just a statue, before finally bursting out of their stone skin and ambushing their victim. Since they are made of stone, they are resistant to damage to some extent. They have been known to utilize basic magic to absorb the health of those stuck by their claws.[1] Gargoyles sometimes wield melee weapons in combat.[2]

Gargoyles have been utilized by many different civilisations on Tamriel, including Bretons, Yokudans, Imperials, Ayleids, and Khajiit.[3] They most commonly resemble misshapen humanoid beasts, with gray-green skin, gnarled tusked faces, horns, pointed ears, and wings.[4] Khajiiti gargoyles instead possess feline features.[3] Gargoyles are most commonly found in the company of vampires, and some vampire lords possess the ability to use blood magic to summon gargoyles to fight for them.[5][6] Gargoyles created by vampires sometimes appear more batlike than their usual counterparts.[7]

Gargoyles have been known to pay amorous attention to non-living statues that have been carved to resemble a fellow gargoyle.[8] Indeed, they can often be found near non-living statues which are similar in appearance to themselves, providing a greater aid to their camouflage.[1] Some gargoyles possess an outer skin of frozen ice rather than stone.[9] Sangiin is known to be associated with spectral gargoyles created by blood magic.[10]

The tongue of a gargoyle is required to create a stoneflesh antidote, a potion which can cure a person who was turned to stone. The ancient Yokudans were believed to have been inspired by gargoyles and experimented on their own flesh with such curses.[11]

Gargoyles have been likened to the giant goblins first encountered by the Yokudans when they conquered Hammerfell,[4] although they are actually completely unrelated.[12]