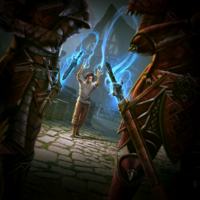 Mysticism is one of the six colleges of magic, and the one least understood by the magical community.[1] The art has been described as allowing a mage "to alter the nature of magic itself"[2] and as involving "the manipulation of magical forces and boundaries to bypass the structures and limitations of the physical world."[3] The spells in the school have their origins with the Psijic Order of Artaeum, who call their study the "Old Way",[1] and the school has occasionally been referred to as the Way of the Psijic.[4] The practice of Mysticism seems to require dealing with "conundrums and paradoxes"[1] and abandoning logic to "embrace a temporary sort of insanity" which may lead the student to long-term harm if practiced without proper instruction.[5] Its usage was common among the mystic Reachman shamans during the Second Era.[6]

Later, when Hannibal Traven, Archmage of the Mages Guild in the closing years of the Third Era, launched his investigation that led to Necromancy being banned in the Guild, an attempt was made by necromancers to involve Mysticism in the debate to protect their favored school.[5]

The spells in the school can be divided into five main sections: transport spells, detection spells, absorption spells, reflection spells and "other". The Other spells work directly upon magical forces of the unseen world, with effects such as dispel, soul trap, and telekinesis. Absorption magic is often considered part of the college of Restoration rather than Mysticism.

In 3E 431, the Council of Mages decided that Mysticism magic in Cyrodiil was to become the responsibility of the guildhall in the town of Leyawiin.[9] By 4E 201, Mysticism was no longer regarded as a separate school of magic by the College of Winterhold. There is no mysticism specialist there, and the traditional spells have all been moved to other schools.